Fuel economy in the Volkswagen Passat is very competitive, but the warranty could be more generous

Volkswagen tells us that around 80% of Passats are sold to the fleet market but low running costs are important whether you're a business user or private owner.

Volkswagen has announced WLTP fuel economy and CO2 emission figures for the upgraded Passat, and they might be lower than expected if you’re used to looking at NEDC figures.

On paper, the cheapest Passat to run is the plug-in hybrid Passat GTE models, which is more economical than before and claims 217.3 to 235.4mpg and CO2 emissions of just 28-30g/km. During a mix of motorways, country roads and city streets, our average fuel economy according to the car’s computer was in the mid 50s – including two three-hour charges from a domestic electricity supply. While this is far more than you’d achieve in a similarly powerful petrol car and compares well to the 188bhp 2.0-litre diesel, it’s a long way short of the claimed figures. 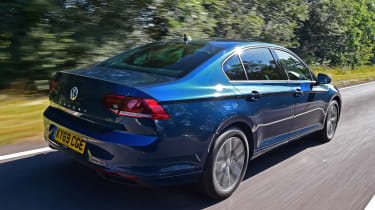 It’s also worth remembering that the GTE is a lot more expensive to buy than the diesel equivalent. However, the more you use the car in its pure electric mode, the better the fuel consumption will get. As well as saving you money on fuel, the GTE is also eligible for a £10 VED discount, resulting in an annual bill of £140. Some versions of the hybrid also attract an annual £325 surcharge, payable from the second year for five years, as they can cost more than £40,000. This applies to all versions of the Passat where the list price exceeds this figure.

Of the conventional diesel cars, the entry-level 1.6-litre Passat diesel is an appealing choice if you want to keep the price low. Volkswagen says it'll return 51.4mpg and 144-158g/km. However, this engine can feel underpowered when the car’s fully loaded and it often needs to be worked quite hard – excellent economy isn’t assured unless you drive gently.

The 148bhp 2.0-litre EVO model features cylinder deactivation technology (the first time a VW diesel engine has had this), which shuts down two of the engine’s cylinders under light throttle. This makes it the most efficient diesel engine in the Passat line-up, capable of between 55.4 to 60.1mpg when equipped with a six-speed manual gearbox.

Fuel consumption across the Passat range is slightly affected by the size of the car's wheels – the smaller the wheels, the better the efficiency.

The petrol engines' economy is up to 47.1mpg if you pair a manual gearbox with the 148bhp 1.5-litre EVO engine; this also features cylinder deactivation. Fitting the DSG automatic in entry-level SE trim sees this drop slightly to 44.8mpg. Emissions of 135 to 146g/km of CO2 place it in the lower BiK bands for company-car drivers.

All petrol and diesel versions of the Passat cost £150 a year to tax.

Insurance groups for the Passat range from 12 to 28 – roughly the same as other saloon cars of a similar size.  Unlike the previous entry-level S trim, which hasn’t been continued for the facelift model, all versions come with Volkswagen’s 'Pre-Crash' crash mitigation system that helps reduce your premiums.

Like all Volkswagens, the Passat comes with a three-year/60,000-mile warranty that's eclipsed by models such as the Kia Optima, which offers a seven-year/100,000-mile guarantee. You can extend the Passat's warranty up to a maximum of five years or 90,000 miles at extra cost.

Volkswagen offers a number of solutions that make it easier to pay for the maintenance of your car. Less than £20 a month covers servicing for two years/20,000 miles, three years/30,000 miles or four years/40,000 miles. If you’d prefer to pay for maintenance in one go, a minor service costs £150 and a major one £300.