While the Volkswagen Passat has built up a reputation for excellent build quality, it's always been eclipsed by the excellent Ford Mondeo when it comes to driving enjoyment. Nevertheless, the latest Passat's underpinnings make it better to drive than the old model thanks to increased strength and reduced weight.

The car doesn't lean too much if you corner enthusiastically, while the steering is accurate and there's plenty of grip, although the extra weight of the GTE model causes it to feel a little less agile. No version of the Passat is terribly involving to drive, but it always feels unflappable and comfort levels are impressive too. The Passat comes with a six-speed manual gearbox as standard. It's nice to use and most models offer the choice of Volkswagen's excellent DSG twin-clutch automatic gearbox. 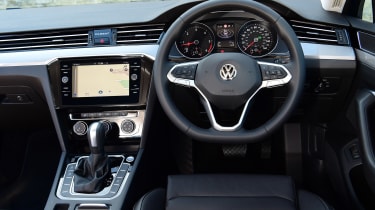 The 148bhp 2.0-litre diesel engine is the pick of the bunch. It offers a decent amount of power while also being refined and smooth. The more expensive 187bhp version gives you more of the same. The 1.6-litre model feels punchy enough but isn't as refined on the motorway as the 2.0-litre engines and sometimes needs a lower gear to give you the power you need.

That's not a problem you're likely to encounter in the top-of-the-range 237bhp twin-turbo 4MOTION diesel model. It comes as standard with the DSG auto gearbox and offers rapid acceleration and a more flexible spread of power for effortless overtaking. Standard four-wheel drive means it grips very well and the progressive steering – which adjusts depending on the angle of your inputs – makes it quicker to turn into corners. Going from 0-62mph takes just 6.1 seconds, compared to 8.9 seconds in the 148bhp 2.0-litre-diesel.

While Passat buyers used to be limited to diesel engines or the expensive hybrid model, VW has added a range of petrol engines to the line-up in this facelifted model. The 1.5-litre TSI with 148bhp is our pick of the range, with a blend of power and economy that gives the diesels a real run for their money. With plenty of pulling power as soon as you press the accelerator, you can almost drive it like a diesel too, with early gear changes. It’s a particularly smooth engine and it’s almost impossible to tell when two of the cylinders shut down to save fuel.

Volkswagen has also introduced a 2.0-litre TSI petrol engine, which is shared with other cars in VW Group, including the Skoda Superb. This engine produces 187bhp and is equipped with a seven-speed DSG gearbox for 0-62mph in 7.5 seconds. A more powerful 268bhp version will arrive later this year equipped with VW’s 4MOTION four-wheel drive. This powertrain is currently limited to the R-Line Edition Passat estate model and gets from 0-62mph in just 5.8 seconds - quicker than the SEAT Leon Cupra hot hatchback.

The Volkswagen Passat GTE has been heavily updated for 2019, and now offers more electric range than before. A petrol-electric hybrid using a 1.4-litre TSI petrol engine and an electric motor, it can now travel up to 36 miles on battery power alone, while offering impressive fuel economy and CO2 emissions figures. It’s capable of 0-62mph in 7.4 seconds, with the electric motor delivering an impressive dose of acceleration when you accelerate hard. This thrust quickly dries up though and the car's performance in corners is blunted by the extra weight of the hybrid setup. Overall, it offers smoother performance than a diesel, but comes a little short of feeling as sporty as the GTE badge implies.