Spacious, comfortable and with a big boot, the Volkswagen Polo is a practical supermini

Superminis have consistently grown in size, and that includes the Volkswagen Polo. In fact, VW says it’s the same size as the Mk4 Golf from 1997. Such inflationary trends lead to more generous space inside, and the Polo is impressively practical.

We should point out that while the previous Polo was offered as a three or a five-door model, this latest generation car is five-door only. That won’t bother most buyers – a five-door car is inherently more practical, after all, but if you really like the looks of three-door hatchbacks, you’ll have to find them elsewhere. 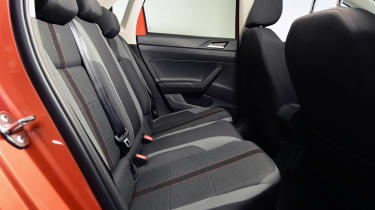 The Polo’s dashboard features several storage areas, with a large cubby below the heating controls, a decent glovebox and well sized door bins. As is usually the case, space in the front is more than adequate, with comfortable seats and an excellent driving position, but it’s in the rear where the Polo really impresses. 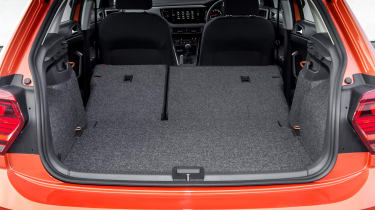 VW has made the most of the new car’s increased exterior proportions, meaning there’s far more legroom in the back than you might expect, while the rear doors open nice and wide. The Honda Jazz beats it in terms of ultimate rear space, but the Jazz – while ostensibly a hatchback – has always had the air of a quasi-people-carrier about it, while the Polo is pure supermini.

The positive impressions continue when you come to the Polo’s boot, as it’s big. At 351 litres, it’s up 25% from before, and almost as big as several models from the class above, while the bigger Golf has just 10% more space than the Polo.

The Polo is a small car, and isn’t typically bought with towing in mind. But it is capable of towing a small trailer or caravan with the ability to pull 800-1,200kg depending on the specification and engine you choose.