The latest Volkswagen Polo might be bigger than before, but it's still cheap to run

The range of engines offered with the latest Volkswagen Polo should ensure that whatever your requirements are, be it economy, performance or a combination of the two, you should be able to find one that’s suitable.

Kicking off the range is a 1.0-litre non-turbocharged petrol, now only available with 79bhp. This engine was offered with the previous generation Polo and returns up to 51.4mpg. One caveat though: you need to drive this version hard to get up to speed on faster roads, which will see your fuel economy tumble. 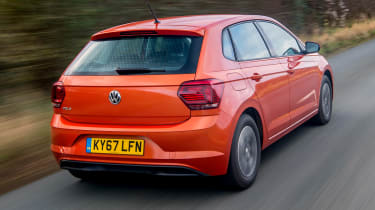 The 108bhp version of the 1.0-litre engine offers the same efficiency, with an extra gear in the gearbox. Picking a seven-speed DSG automatic gearbox with this engine results in economy falling slightly to 49.6mpg, and CO2 emissions figures ranging from 128g/km to 138g/km.

Volkswagen previously offered a single 94bhp 1.6-litre diesel engine, and you’ll want to hunt out a used example if you want the best economy; this engine officially returns almost 60mpg.

The Volkswagen Polo with a 79bhp 1.0-litre engine qualifies for insurance group two, making it amongst the cheapest cars to insure. This would be impressive even for a city car, but such low ratings for a supermini are rare and point towards the Polo’s impressive safety kit. The turbocharged 1.0-litre starts in group eight, while ratings for the diesels span from seven to eight and the Polo GTI sits in groups 26 to 28.

The three-year/60,000-mile warranty Volkswagen provides with each new car it sells is average, but many other manufacturers offer more generous policies. Pick a Kia Rio, for example, and you're covered for seven years or 100,000 miles.

VW’s fixed-price service plans are competitively priced, and two-year/20,000-mile and three-year/30,000-mile policies are offered. VW also gives you the choice of fixed or variable service intervals, with fixed policies best for low-mileage users – although annual maintenance is a good policy.