The T-Cross is good to drive and impressively refined

Small SUVs are unlikely to be the dream vehicle for keen drivers, but the T-Cross easily competes with the current class leaders in this regard. It drives well, with pleasingly light steering and a comfortable ride. Over most bumps and bad surfaces it’s composed, and body roll is kept to a minimum through the majority of corners.

Like many other VW Group cars, the T-Cross isn’t built primarily to excite; its handling and driving experience is composed and careful, which inspires confidence in the car. The higher driving position compared to the Polo helps with seeing further ahead, and is one of the main reasons to buy an SUV over a standard hatchback. If you're after more fun behind the wheel, consider the Ford Puma. 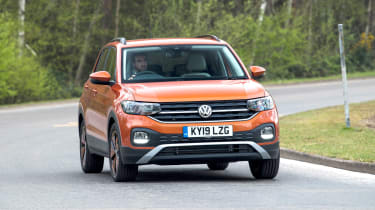 A 1.0-litre turbocharged petrol engine is likely to be the biggest seller, with outputs of either 94 or 113bhp. While the latter is essentially the engine from the Volkswagen up! GTI, the T-Cross doesn’t provide mini-hot hatch performance. However, it manages 0-62mph in a smidge over 10 seconds, or 11.5 for the 94bhp version, and both will be absolutely fine for the majority of drivers.

Refinement is very impressive for such a small car. In fact, it feels very mature and capable. The higher-powered version offers a six-speed manual gearbox over a five-speed in the entry version, and the 113bhp engine is available with a slick DSG automatic gearbox at extra cost. 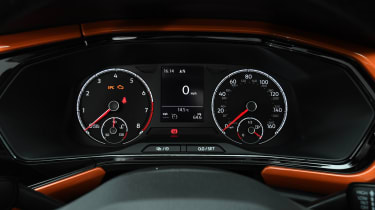 In January 2020, Volkswagen introduced a 148bhp 1.5-litre petrol engine to the range. It’s almost as efficient as the 1.0-litre, thanks to the ability to shut down half its cylinders when you’re not pressing the throttle hard, but the 0-62mph time improves to 8.5 seconds. Its top speed is 124mph.

A diesel engine joined the range in 2019, and it’s the familiar 94bhp 1.6-litre engine from the Polo. It prioritises efficiency over performance, and 0-62mph takes almost 12 seconds. No hybrid version is currently available to rival the Renault Captur E-Tech, which is a shame. However, Volkswagen is planning to electrify most of its range, so a hybrid or pure electric version could be in the pipeline.