You might look at the T-Cross and think that it’ll barely be big enough to accommodate the weekly shop, but its small-looking proportions disguise practical interior space. The boot, while not the biggest in class, is a pleasant surprise, as is the thoughtful touch of rear seats that slide forwards and backwards.

The extra headroom afforded by the taller body will be a big draw to many customers, as it makes the T-Cross that bit more practical than the Polo. At the time of writing, Volkswagen hasn’t revealed interior dimensions, so it’s hard to compare it against the Renault Captur or SEAT Arona. However, we did find it to be spacious enough for two adults to sit behind each other.

The T-Cross is quite a practical car generally, not just in the context of its compact size. It’s slightly longer than the Polo and 107mm taller, which makes it feel considerably more spacious inside than VW’s supermini hatch. Large windows allow the cabin to feel light and airy. 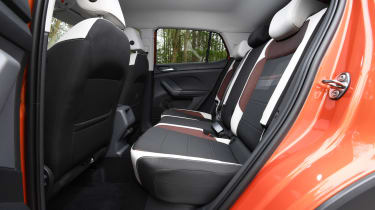 Cleverly, the rear seats can slide backwards or forwards, depending on how you want to divvy up cargo and passenger space. This trick is usually offered on much more expensive cars, or people carriers that prioritise substance over style. As a result, the T-Cross is very versatile, despite the distance between its wheels (the wheelbase) being identical to the Polo.

You’ll want to keep the rear seats pushed as far back as they’ll go if you regularly carry passengers, as legroom vanishes with the seats fully forward.

Creating an SUV based on a Volkswagen Polo may divide opinion, but it certainly benefits boot space. The T-Cross offers between 385 and 455 litres with the rear seats up, depending on where you have them, but even the smaller number is five litres bigger than the boot in the Volkswagen Golf. With the rear seats pushed forwards as far as they’ll go, the boot is no longer flat - there’s a large channel where the seats were, which your possessions will fall into if they aren’t secured. 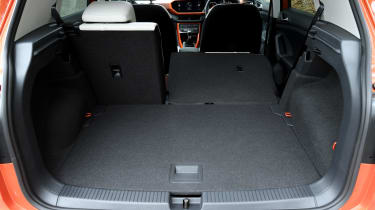 Flip those seats down and you’ll have 1,281 litres to fill - plus, you can fold the front passenger seat flat to accommodate longer items. In this configuration, the T-Cross offers almost as much space as a small van, which means it’s perfect if you occasionally need lots of luggage space but only have a small parking bay.

In terms of boot space, the T-Cross leaves its rivals far behind. The Hyundai Kona offers up to 361 litres seats up and 1,143 litres seats down, the SEAT Arona offers 400 litres in five-seat mode, while the larger Renault Captur matches it almost exactly. In fact, with the seats pushed forward, the T-Cross offers slightly more space than the larger T-Roc.