The T-Cross is economical and will have excellent residual values

There was a time when SUVs were typified as being ‘gas guzzlers’, but the latest wave are often almost as economical as their hatchback counterparts. The Volkswagen T-Cross, which shares its engines with the Polo hatchback, should be very economical to run, whether you opt for petrol or diesel power. It’s not a heavy car, despite its SUV bodystyle, and only comes with two-wheel-drive.

Many buyers are tempted by the VW badge on the front, and this means the T-Cross is set to offer great residual values - it should lose less of its value than some other cars in the same class.

It's now possible to spec the Volkswagen T-Cross with a diesel engine, but the 1.0-litre turbocharged petrol engine is cheaper, and should be economical enough for most people. Available on S and SE models, the entry-level 94bhp version returns up to 47.9mpg, while the 113bhp version (offered on all but S trims) is almost as frugal at up to 47.1mpg. Petrol versions of the Renault Captur manage around 45mpg, so you’ll struggle to notice a difference between the two cars at the pumps. 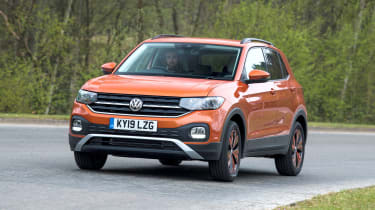 Volkswagen now sells the T-Cross with a more powerful 1.5-litre EVO TSI petrol engine. It has cylinder deactivation (under light throttle it’ll run on just two cylinders) to save fuel, but is only available with the DSG automatic gearbox. You can expect 44mpg from this engine, which is still pretty reasonable and almost matches the claimed 44.8mpg figure of the 1.0-litre engine with an automatic gearbox.

Aimed at drivers who’ll cover more than 12,000 miles a year, the 94bhp 1.6-litre diesel promises up to 54.3mpg. Equipped with the automatic gearbox, you’re more likely to see around 51mpg.

The T-Cross should be affordable to fill up, and all variants will cost £150 in tax from the second year of ownership - the first year’s tax is usually rolled into the on-the-road price of the car.

The T-Cross should be affordable to run, with insurance starting in group 8 for S and SE models with the 94bhp petrol engine. Top-spec R-Line models occupy 11-13, but the 1.5-litre petrol engine increases this to groups 16-17.

Considering the desirable badge, it’s impressive that the T-Cross is no more expensive to insure than the SEAT Arona, which also starts in insurance group 8E for 94bhp versions. 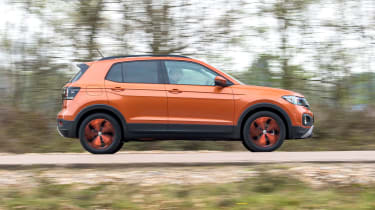 Like all new VW cars, the T-Cross benefits from a three-year/60,000 mile warranty, which is transferable to the next owner if you sell or return the car before the warranty expires. This warranty is fairly standard, although far from class-leading. Rivals such as the Hyundai Kona and Kia Stonic have five and seven-year warranties respectively, which is something to bear in mind if you plan to keep your car for a long time. You can buy extended warranties from VW, which work out at about £140 per year.

The T-Cross’ paint will be covered for three years, while the car also comes with a 12-year anti-corrosion guarantee.

Servicing the T-Cross should be relatively pain-free. Volkswagen has the third-largest dealership network in the UK. Service intervals should be the same as the Polo, so you’ll have to book it in for a service every year or 10,000 miles, whichever comes first.

As with all VW models, you’ll be able to take out a service plan, which’ll spread the cost of your next two services over 18 monthly payments of between £15-20. You can either pay this separately, or add it to your monthly finance payments if you’re not buying the car outright.