All Audi A1 Sportback engines are smooth, quiet and offer plenty of power

The Audi A1 Sportback is slightly taller and wider than the three-door A1, but it's still a small car and feels agile as a result. There’s plenty of grip and the steering feels sharp, although it's still not as much fun to drive as the new MINI 5-door hatchback. That’s not to say the Audi A1 Sportback isn’t fun – it is. Low weight and a compact size certainly make it agile through corners, plus the steering is nicely weighted, making it easy to drive in and around town as well as on motorways.

The driving experience is further enhanced by the standard electronic differential, which boosts grip when needed. However, the Audi A1 Sportback suffers from a rather firm ride, and if you decide on the S line model it becomes quite uncomfortable. The fast S1 model is the car to go for if you want the most exciting driving experience and it also gets grippy four-wheel drive, which Audi calls quattro. 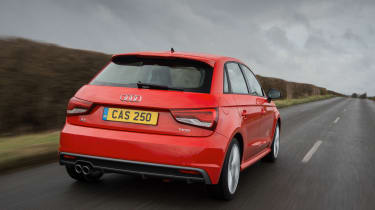 As standard, the A1 Sportback features six-speed manual gearbox, but Audi also offers an excellent seven-speed DSG automatic, although it's an expensive option.

Diesel fans are limited to just one engine in the A1 Sportback: a 114bhp 1.6-litre TDI that’s smooth and punchy, but not particularly sporty, taking 9.4 seconds to cover 0-62mph. The new MINI 5-door will complete that sprint in a similar time, although it also offers a 2.0-litre diesel Cooper SD that's much quicker.

The best petrol engine in the A1 range is also the smallest. The three-cylinder, 1.0-litre engine takes the A1 Sportback from 0-62mph in 11.1 seconds, but it's eager to rev making it huge fun to drive - plus it feels faster than the bare figures suggest. Its three-cylinder layout means it's not quite as smooth and quiet as the four-cylinder 1.4-litre engines but it is the best choice for around-town driving.

The 1.4-litre TFSI produces either 124 or 148bhp and is available with a twin-clutch, seven-speed S tronic automatic gearbox.

These engines feel eager to rev and produce a growl from the exhaust that suits the A1 5-door Sportback’s sporty character far better than the diesel engine. The 1.4-litre TFSI Sport models offer the best balance of fuel economy and performance: the more powerful car does 0-62mph in only 7.8 seconds, while the 1.6-litre diesel completes the same sprint in 9.4 seconds.