All Audi A1 Sportback engines offer superbly low running costs, thanks to clever new technology such as stop-start (which shuts down whenever the car comes to a standstill). The really clever stuff, though, is the cylinder on-demand technology found on the more powerful petrol engine, which has now filtered down from the more expensive S model to the other cars in the A1 Sportback range. This shuts down part of the engine that’s not needed when you’re cruising along gently, saving even more fuel.

Audi offers an excellent diesel that returns the best fuel economy in the range, with 76.3mpg possible from the 1.6-litre TDI and CO2 emissions of 99g/km. However, there's no longer a road tax benefit to this, as all A1 Sportbacks cost £140 a year.

Despite the headline mpg figures of the Sportback diesel, we'd be tempted to go for one of the petrol engines (there’s a choice of two 1.4-litre engines in 124 and 148bhp power outputs and a brilliant 1.0-litre) – the reason being that they don’t sound as harsh as the TDIs under hard acceleration.

The manual 124bhp 1.4-litre TFSI can return up to 55.4mpg, while also qualifying for cheap road tax thanks to its low 118g/km CO2 emissions. 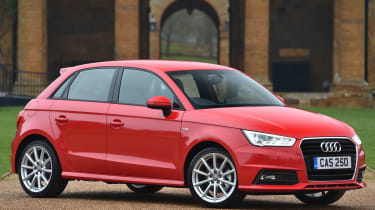 Surprisingly, the even more powerful 148bhp TFSI manages a lower CO2 figure – only 112g/km – and just 111g/km when paired with the seven-speed S tronic gearbox. Clearly the A1 is better at changing gear efficiently than any driver.

Audi’s cylinder-on-demand technology is partly responsible for these excellent economy and emissions figures. It works by effectively switching off half the engine when it’s not needed, in order to save fuel.

A 1.0-litre three-cylinder engine has replaced the old 1.2, improving on that model's fuel economy and CO2 emissions. Here the A1 emits 97g/km and can cover 67mpg. That means, not only is the 1.0-litre the nicest engine to drive, it's also the cheapest petrol engine to run, and emits less CO2 than any other engine here.

The very fast S1, meanwhile, struggles to achieve 40mpg and has CO2 emissions of 166g/km. In terms of the competition, MINI's five-door hatch really keeps the Sportback on its toes. The 1.5-litre Cooper petrol manages 60mpg and 109g/km of CO2, while the 1.5-litre Cooper D returns a remarkable 79mpg and emits only 95g/km of CO2.

Do note that the larger alloy wheels included with some trim levels will adversely affect fuel economy and CO2 emissions.

The A1 Sportback with a 1.0-litre petrol falls into insurance group 15, which isn’t bad considering it’s a desirable car with a premium badge on the bonnet. The 1.4-litre versions increase this to groups 21 or 25, while the diesel sits in group 19. The powerful S1 Sportback is in another league, placed in group 37 out of 50.

The Sportback comes with a standard three-year warranty, providing cover for unlimited mileage in the first two years and up to 60,000 miles in year three. This can be extended, but at a cost of £235 to increase it to four years or 75,000 miles (whichever comes first) or £500 to have five years or 90,000 miles of cover.

Hooking customers in for the long term is very much a priority for car companies these days, and Audi has some fairly comprehensive service plans to give A1 owners peace of mind. Audi Complete is the top package. It covers servicing, maintenance and tyres for three years and you pay between £20 and £27 a month during that time.

Alternatively, you can choose Audi’s Service Plan, which involves making a one-off payment for five years’ servicing and costs between £289-£450, which is about average for VW Group. The good thing is that when you pay up front, you pay today’s prices, avoiding possible inflation. MINI has a similar approach to servicing.