The Audi A4 Avant has a large range of powerful and efficient engines that keep running costs down. The extra weight of the estate body over the saloon means the Avant isn’t quite as clean or economical as its four-door sister model but it still has the edge over most SUVs with the greenest model emitting just 137g/km of CO2. 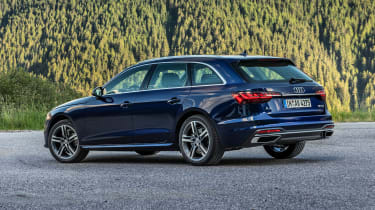 Every Audi A4 Avant gets mild-hybrid electrical assistance. This system uses a compact 12-volt mild-hybrid system and a belt-driven alternator to recoup energy and store it in a small lithium-ion battery, assisting the engine under acceleration and enabling smooth stop-start in traffic.

Every diesel version of the A4 Avant uses a turbocharged 2.0-litre engine. Both the 30 TDI (134bhp) and 35 TDI (161bhp) are likely to appeal to economy conscious drivers. Regardless of which version you pick, both are capable of identical efficiency numbers, with fuel economy ranging from 48.7mpg to 54.3mpg and CO2 emissions of 137-152g/km, depending on exact specification.

The 40 TDI is fitted with quattro four-wheel drive as standard and produces 187bhp. The extra weight and driven wheels affect efficiency, with claimed economy falling to 43.5-46.3mpg and emissions increasing to 156-169g/km.

Petrol engines have become more popular in the wake of negative press around diesel engines, and Audi offers the A4 Avant with three petrol options. The entry-level petrol is now a 2.0-litre, badged 35 TFSI, and is capable of 37.7-41.5mpg and CO2 emission of 157-170g/km.

The more powerful petrol choices are both 2.0-litre turbocharged four-cylinder engines, with the mid-range 187bhp 40 TFSI capable of 37.7mpg and emissions of 156-170g/km. Opt for the range-topping 242bhp 45 TFSI and quattro four-wheel drive is standard. This compromises efficiency compared with front-wheel drive models, with fuel economy of up to 35.3mpg and CO2 emissions of 183g/km.

Insurance groups for the facelifted A4 Avant are highly dependent on your choice of engine and trim level. New insurance groups haven't been confirmed yet for the updated car, but previous 148bhp 2.0-litre 35 TDI diesel and 35 TFSI petrol models sat in group 20, while the most powerful diesel and Audi S4 Avant were both in group 36.

The A4 requires two different types of alternating services: major and interim, and prices vary depending on engine size. For the 2.0-litre engines and smaller, a major service costs from around £300 while the interim service starts at £150. These prices rise to around £400 and £200 for larger engines. The interim service changes the oil and oil filter, while the major service includes an air filter change, too. Both services also include a full health check.

As with the rest of the Audi range, the A4 Avant comes with a three-year/60,000-mile warranty as standard. This is fairly standard for the class – although neither BMW nor Mercedes cap mileage.