Although it prioritises comfort over sporty handling, the Audi A4 Avant is still good to drive

The Audi A4 Avant very much prioritises refinement and comfort over a sporty drive, so driving enthusiasts are likely to be tempted by the BMW 3 Series Touring. That’s not to say the A4 is bad to drive, however, as the steering is accurate, even though it lacks feedback. Body lean in corners is well controlled, too, despite the comfortable suspension. In this respect, it’s well worth forking out extra for the optional adaptive dampers, which allow you to set up the suspension for the road ahead. You can make them stiffer if you want better high-speed cornering, or softer if you’re after a more comfortable ride. The comfortable ride is slightly diminished if you go for a model with larger wheels, though.

Under the bonnet, the engines are all very good; providing decent power, excellent efficiency and impressive refinement. Audi is confident the diesel A4 Avant will be much more popular than the petrol, but if you don’t do many miles a year, the latter is worth a look. It’s the high-performance diesel S4 that’s the most dynamically engaging and quickest model in the range right now, although it’s not quite as much fun as rivals like the BMW 340i or the Mercedes-AMG C43.

Across the A4 Avant range, you can choose either a six-speed manual gearbox or a seven-speed dual-clutch automatic – although the 2.0-litre 35 TFSI petrol is the only one with a manual gearbox option. Economy and emissions are closely matched whichever you choose and they’re both smooth and well matched to the engines on offer. The S tronic automatic gearbox has seven ratios and can be quite jerky when you accelerate quickly and it changes down a gear in response. 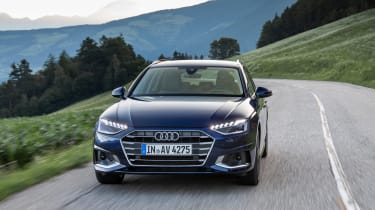 There are three 2.0-litre diesel engines available, making 134, 161 or 187bhp and badged 30, 35 and 40 TDI respectively. All three come with a seven-speed S tronic automatic gearbox, and should provide sufficient power for most drivers as well as strong fuel economy and CO2 emissions.

The mid-range 35 TDI produces 161bhp and is our pick of range, as it feels barely slower than the more powerful version in everyday driving. It’s also well suited to the seven-speed dual-clutch automatic gearbox, managing 0-62mph in 8.5 seconds. It’s also smooth, refined and quiet on the move, making long motorway journeys easy.

Every 40 TDI A4 Avant is fitted with quattro four-wheel drive, with the more powerful 187bhp diesel engine managing 0-62mph in 7.6 seconds.

Later this year, buyers will be able to buy the range-topping 45 TDI with a 3.0-litre, six-cylinder diesel offering 228bhp, but this is likely to be a fairly niche choice. Quattro four-wheel drive is also standard here, and 0-62mph takes just 6.1 seconds. A tuned version of this engine with 342bhp is fitted in the range-topping Audi S4 Avant, which we've reviewed separately.

Despite the propensity for buyers in this class to go for a diesel, petrol engines have advanced so much in recent years that you shouldn’t necessarily dismiss them out of hand.

The petrol range encompasses a 2.0-litre with a choice of three power outputs. The entry-level 35 TFSI petrol engine is available with a six-speed manual and is capable of 0-62mph in 8.9 seconds, with the seven-speed automatic gearbox raising the time to 9.2 seconds.

Both of the more powerful petrol engines are equipped with a seven-speed automatic gearbox as standard. The mid-range 187bhp 40 TFSI is only available with front-wheel drive and gets from 0-62mph in 7.5 seconds.

The most powerful 242bhp 45 TFSI engine is only available with quattro four-wheel drive, and is capable of 0-62mph in six seconds.