Inside, the Audi A4 Avant looks and feels like a very high-quality machine

This is an area where Audi has led the way in recent times, but rivals have gone all out to catch up with the Audi. Naturally, it’s almost identical to the saloon: everything is beautifully put together and the materials feel of the highest quality, while the controls are all laid out perfectly, with everything easy to find and operate.

As we’ve come to expect with Audi, the Avant’s interior is finished to a very high standard. The design is clean and simple, while the materials used are of great quality. Rivals such as the Mercedes C-Class Estate, BMW 3 Series Touring and Volkswagen Passat Estate run the Avant close here, and have even overtaken it in some areas. 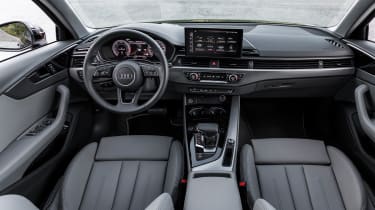 Most of the car’s functions are controlled using a 10.1-inch colour screen mounted in the dash, which was the most noticeable upgrade for the facelift. Audi has ditched its a rotary knob in the centre console in favour of a touchscreen but it can be slightly laggy. This system is clear and easy to use, with all the various menus being laid out logically.

Audi’s Virtual Cockpit replaces the traditional instrument dials with a TFT screen that can be customised a number of different ways and is now clearer than ever. This includes having the satellite navigation map taking up the majority of the screen, with smaller dials for the speedometer and rev counter at either side. This function is controlled via the car's menu, rather than by choosing a driving mode like in some models.

Like the saloon, the A4 Avant comes in five trim levels: Technik, Sport, S line, Black Edition and Vorsprung.

More reviews for A4 Avant estate

If you go for Sport specification, you get leather-trimmed sports seats and LED interior lighting. You also get a leather multifunction steering wheel, larger 18-inch alloy wheels and Sport trim exterior styling.

The S line model gets even more kit as standard. This includes leather and Alcantara trimmed seats and stainless-steel pedals. Most of the upgrades are reserved for the exterior, however, including 19-inch wheels (which make it slightly less efficient) a 23mm drop in ride height, a sporty bodykit and Audi’s scrolling rear indicators.

The range-topping Vorsprung model adds to the equipment list further still with Matrix LED headlights and front and rear scrolling indicators. Folding door mirrors are also standard, as is a panoramic sunroof. The interior is trimmed in Nappa leather upholstery with heated front and rear seats, a Bang & Olufsen 3D stereo system, a head-up display and wireless smartphone charging. 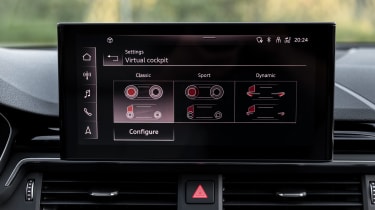 You need to be careful with the A4 Avant options list, as a few careless ticks can add thousands to your bill. There are a few options we’d heartily recommend, however. The head-up display (which projects certain information, such as your speed and sat-nav directions, on the windscreen), the upgraded LED Matrix headlights and adaptive dampers are all very impressive.