The Audi A4 Avant beats its closest rivals for practicality

The Audi A4 Avant is a pretty big car, measuring 4,725mm in length and 1,842mm in width. That makes it bigger than the BMW 3 Series Touring and Mercedes C-Class Estate. Granted, it’s not quite as vast as the Skoda Superb Estate, but very little this side of a luxury limo is. This means the A4 fares well in terms of practicality, as any good estate car should. 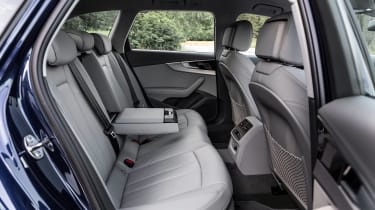 There’s plenty of room in the front, while the rear seats will accommodate two adults or three children with relative ease. Headroom is very good all round, while the driver’s seat and steering wheel have loads of adjustment, so it’s easy to find the perfect driving position. The seats are comfortable, even the sports seats, but the standard ones are good enough that it's not really worth paying extra to upgrade.

There are two ISOFIX child-seat mounts on the back seats, as well as a third on the front passenger seat, however the presence of a transmission tunnel means legroom in the middle rear seat is restricted – but no more than in either the 3 Series Touring or the C-Class estate.

The two other rear seats are well catered for in this regard, however – only the Skoda Superb Estate allows its back-seat occupants to stretch out more. Getting in and out of the Avant is pretty easy, too, thanks to a higher roofline at the back than the A4 saloon.

There are a decent number of storage bins dotted around the interior, with well-sized door pockets, a deep cubbyhole beneath the centre armrest, two cup-holders in the front and a glovebox that can easily fit a large bottle of water. 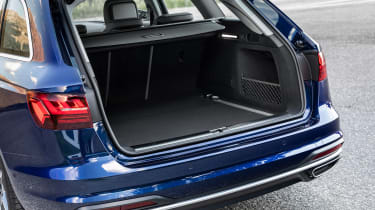 Compared to its rivals, the A4 Avant fares pretty well here. Its boot is nowhere near as big as you'll find in a Skoda Superb or Volkswagen Passat estate, but it does well against its Mercedes and BMW rivals. There’s 495 litres of boot space with the rear seats in place but flip them down using the handy plastic levers in the boot and that extends to 1,495 litres. This is almost exactly the same as the BMW and Mercedes.

The Avant’s boot is a very practical shape, being nice and square, while the standard powered tailgate and low loading lip makes getting heavy items in and out pretty simple. There are also a couple of fold-away hooks in the boot to hang shopping bags from, as well as a storage net to help stop items rolling around. One minor criticism is that when the rear seats are folded, the boot floor isn’t completely flat, but that’s fairly standard for the class – plus there’s no lip between the boot floor and the seatbacks. A handy feature is that there are two strips of LED lights on either side of the boot, which helps illuminate the load space.

As is often the case, how capable the A4 Avant is as a tow car is determined by your engine choice. The 2.0-litre petrol has a limit of 1,600kg, but this rises to 2,100kg if you choose the most powerful diesel model.