The way the Bentley Bentayga drives is seriously impressive

With running costs as expensive as they are with the petrol Bentley Bentaygas, it’s a good thing that the car is fun to drive. The Bentayga really is a car for all occasions. On long journeys, it cruises effortlessly, comfortably and quietly. When you want to surprise your passengers, though, it’s capable of truly astounding acceleration that belies its size and 2.5 tonne weight.

While extracting performance like this from an SUV is impressive, what’s really surprising is that the Bentayga is more than just a brutal speed machine or motorway cruiser. It’s also agile on twisty backroads, with accurate steering and very little body lean in corners. It really does seem to ‘shrink’ around you when making progress, so it’s easy to forget just how large the Bentayga is. Bentley has played with the settings to make the suspension stiffer and the exhaust louder, increasing excitement by a few notches. Even on a track - not the Bentayga's natural habitat - the four-wheel drive allows you to use as much of the engine's power as you dare, and the Speed can even be coaxed into small slides. 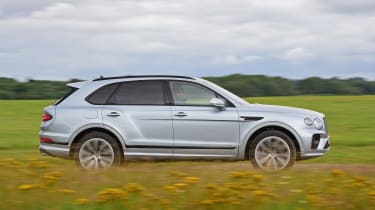 While a Range Rover always feels like a seriously big car, the Bentayga drives with similar agility to a Porsche Cayenne – a smaller, sportier and more overtly driver-focused model. You do start to feel that weight when braking hard, however as it takes a while to scrub off this much inertia. That's unless the optional carbon-ceramic brakes are fitted, helping shed speed almost as quickly as it arrives.

You can choose from one of four driving modes: Comfort, Bentley, Custom and Sport, which alter the stiffness of the adjustable suspension depending on how you feel like driving. There’s also a Land Rover-style system to set the Bentayga up for off-road driving on a variety of surfaces and the suspension can be raised for greater ground clearance.

While the Bentayga generally copes very well with poor road surfaces, some broken tarmac on our test route caused a perceptible shudder that could be felt through the steering and chassis. We suspect this is exacerbated by the car’s huge alloy wheels. 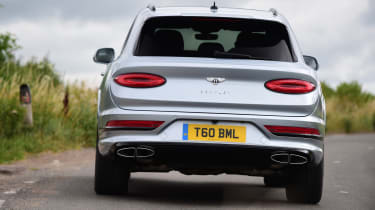 The V8 petrol Bentayga has a 543bhp 4.0-litre twin-turbo engine that’s shared with the Porsche Cayenne Turbo. It gets the Bentayga from 0-62mph in 4.5 seconds and on to a top speed of 180mph. It does a good job of hiding its size and weight, and feels agile and accomplished to drive on a twisty road. The throttle response is excellent and the V8 engine feels happy to be revved hard.

Whereas the pre-facelift Bentayga was a little muted on the move, the new model emits a satisfying deep burble when you accelerate hard. While the Range Rover’s 5.0-litre supercharged V8 petrol engine arguably emits a more exuberant sound, there is no doubt that the new Bentayga sounds good, and is more discreet at lower speeds.

While the performance figures for the forthcoming 6.0-litre, 12-cylinder petrol engine of the Bentley Bentayga Speed have yet to be revealed, we’d expect it to be very similar to the previous version, so expect more than 600bhp and 0-62mph in under four seconds.

Details of the facelifted Bentayga hybrid have yet to be confirmed but it’s expected to use the same turbocharged 3.0-litre V6 petrol engine offering 335bhp and a 126bhp electric motor, for a combined maximum output of 443bhp and 700Nm of torque. It should be fast enough for most SUV drivers, despatching 0-62mph in around 5.5 seconds with a top speed of 155mph.