SUVs use more fuel than hatchbacks; luxury cars have higher running costs than everyday saloons. A luxury SUV, therefore, can be expected to be an expensive proposition, even after the initial purchase price has been absorbed. The Bentley Bentayga consumes a lot of petrol, emits a lot of carbon dioxide and is unforgiving when it comes to servicing and insurance.

The forthcoming plug-in hybrid will help redress the balance when it arrives later this year, with a battery pack and electric motor mounted in the rear. It’s likely to offer around 24 miles of pure-electric range, just like the pre-facelift car, meaning those who drive a shorter commute could do so while hardly using any petrol at all. 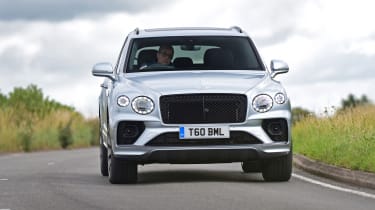 For those Bentley drivers who keep tabs on such things, the V8 petrol can officially manage up to 21.2mpg. In the real world, economy is likely to be around 18mpg when driving carefully. As you’d expect for such a large engine, the Bentayga is not exactly planet-friendly either, with the V8 engine producing CO2 emissions of 302g/km; a similar amount to rival performance SUVs such as the Lamborghini Urus and Audi RS Q8. The high emissions figure places the car in the highest 37% bracket for Benefit-in-Kind (BiK) company-car tax.

The W12-powered Bentayga Speed is likely to offer similar efficiency to the V8 engine but a higher CO2 output. The plug-in hybrid hybrid will be the most fuel efficient of the range thanks to a battery and electric motor, and while official fuel consumption and CO2 emissions figures haven’t been revealed, we’d expect it to sit below 99g/km, making it affordable for business users.

Meanwhile, after the first 12 months of ownership, private owners will need to pay £475 annually for road tax, dropping to £150 the sixth time the car is taxed. When it arrives, the plug-in hybrid reduces the bill to £465 and £140 respectively.

It’s hardly surprising to learn that as a huge SUV with a six-figure asking price, the Bentley Bentayga sits in the most expensive insurance risk category of group 50.

Bentley recommends you service your Bentayga annually or every 10,000 miles – whichever comes first. Assuming the Bentayga is eligible for the same offers as other Bentleys, a two year, fixed-price servicing package should set you back around £2,000.

The Bentayga is covered by a three-year/unlimited-mileage warranty, the same as the warranty you’ll get on a new Range Rover.