While sharing steering-wheel controls with a lesser (if still excellent) car may seem a trifle unbecoming for a Bentley, using similar systems and mechanicals to the Audi Q7 does bring about some advantages where safety and reliability are concerned.

Bentley sells too few cars to have featured in our 2020 Driver Power customer satisfaction survey. The only fair yardstick with which to judge the Bentayga’s reliability is the Audi Q7, with which it shares some mechanical underpinnings. The Q7 is also fairly new, though, so making a fair assessment is impossible at this stage. What we can say is that the Bentayga certainly feels built to last. 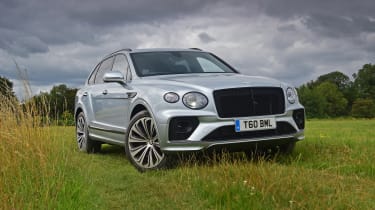 The Bentayga is likely to sell in numbers too few to warrant Euro NCAP crash-testing, although the five-star result achieved by the Audi Q7 provides plenty of reassurance. The Bentayga is also available with the latest safety systems – although many of them are optional. Clever ‘predictive’ cruise control uses sat-nav data to ‘read’ the road ahead, adjusting your speed for changing limits, as well as corners and hills. Rear cross-traffic alert should make reversing safer, while the optional 360-degree bird’s-eye camera and self-parking systems may be wise additions, given that the Bentayga is almost five metres long.