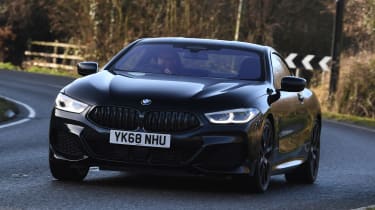 There's no getting away from the fact that the 8 Series coupe is a big, heavy car. In size, it falls between the Aston Martin DB11 and Mercedes S-Class coupe, and weighs a hefty 1,890kg. As a result, the BMW is hard pressed to match the lighter Porsche 911 for agility, but it certainly doesn't disgrace itself.

Take a corner at speed and the 8 Series doesn't respond as immediately to steering inputs as the Lexus LC or Aston Martin Vantage, but it feels more taut and poised than the Mercedes S-Class coupe. There's certainly fun to be had on a challenging road, even more so if you engage the Sport driving mode. 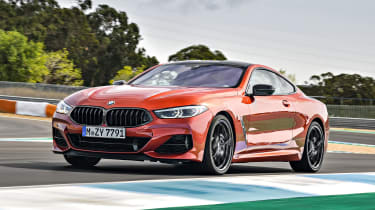 This stiffens the suspension, sharpens the steering and throttle response, and introduces a synthesised exhaust note with artificial pops and bangs, helping to make the 8 Series come alive. However, while the extra sharpness provides entertainment in brief doses, we found the Comfort mode very agreeable – it's more comfortable without sacrificing much in the way of composure in corners.

The BMW's resistance to body lean is particularly impressive, while the huge 20-inch tyres have massive reserves of grip. Although there's no real giveaway that the car is four-wheel rather than rear-wheel drive, the way loose or damp surfaces are gripped even when you accelerate hard is very reassuring.

An eight-speed automatic gearbox is standard. There's no manual option but you can override the gearbox using steering column mounted shifters, and it responds to inputs immediately. Left in automatic mode, gearshifts are quick and would be almost impossible to detect were it not for the engine noise. 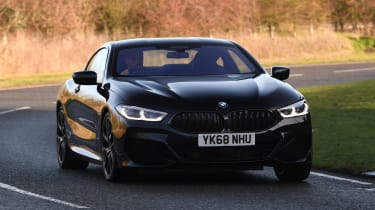 The BMW 8 Series is rare among luxury two-door coupes in offering buyers a diesel option but the 316bhp 3.0-litre straight-six 840d certainly has the muscle to deserve its 'sporty' billing. Getting from 0-62mph takes just 4.9 seconds, with an electronically limited top speed of 155mph.

Although 'diesel' and 'sports coupe' might not read like a match made in heaven, this lazy, muscular engine makes a lot of sense in this application. Its acceleration feels entirely effortless, thanks to the seamless way the automatic gearbox changes gear. It does mean the 840d has a rather different character to the M850i, though, and has less to offer those who drive for the sheer thrill of it.

The sportiest 8 Series models are petrol powered. There's an even hotter M8 with 616bhp but the M850i really ought to satisfy all but the most power-crazed. Its twin-turbocharged 4.4-litre V8 petrol engine develops 523bhp and makes a very appealing roar while doing so. The M850i takes just 3.7 seconds to do 0-62mph and it’s also electronically limited to 155mph.

Since the car’s launch, BMW has added an ‘entry-level’ petrol engine, badged 840i. It’s the only one that comes with rear-wheel drive, but has 335bhp on tap and still gets from 0-62mph in five seconds.