The Citroen C1 is efficient, but its insurance premiums are higher than its main rivals'

To help the car succeed in the city-car class, all versions of the Citroen C1 have an economical 1.0-litre petrol engine that is cheap to run. This engine should also be cheap for most drivers to insure, but the Volkswagen up! and Hyundai i10 will probably be even cheaper. Affordable maintenance costs are another plus point of the Citroen C1 range.

The three-cylinder 1.0-litre petrol engine in the C1 returns fuel economy of between 54.8mpg to 58.9mpg with CO2 emissions ranging from 108-117g/km when equipped with a five-speed manual gearbox, depending on trim level and wheel size. Its low emissions figures place the C1 at the lower end of the Benefit-in-Kind (BiK) bandings for company-car drivers.

In early 2020, the five-speed automatic gearbox was withdrawn as an option for the C1.

After the first year's CO2-based road tax (generally included in the on-the-road price), all Citroen C1s cost £150 a year to tax. 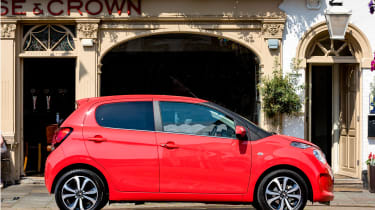 A small, low-powered petrol engine keeps insurance costs low for the Citroen C1 – putting it in insurance group six. Although that means insurance will be cheap for the C1, the Hyundai i10 and Volkswagen up! should have even cheaper premiums, as even the most expensive version of each model sits in group four. That could make a big difference to the cost of cover for young or inexperienced drivers.

Buyers looking for years of risk-free motoring might be put off by the relatively short three-year/60,000-mile warranty offered with the C1. It looks less impressive when you realise Toyota offers a five-year/100,000-mile guarantee on the mechanically identical Toyota Aygo. Hyundai offers similar cover on the i10, although the Volkswagen up!’s warranty is no better than the C1’s.

You’ll need to get your C1 serviced every 12 months or 9,300 miles. Servicing costs start from around £120. Servicing plans are available, covering the first 36 months or 35,000 miles, with prices starting from £750 upfront or around £22 a month by direct debit.