The Citroen C4 Cactus gets close to the Volkswagen Golf for space, but it’s much cheaper to buy

Considering the Citroen C4 Cactus' price, looks and raised body, it’s somewhere between a traditional family hatchback and a small SUV. There’s plenty of space inside, and a reasonably sized boot.

Its armchair-like front seats have room enough for tall adults to get comfortable, but owing to its simple ethos, the Cactus doesn’t offer adjustable lumbar support or a steering wheel that can move for reach. The Citroen’s boot gets close to matching the Volkswagen Golf’s luggage capacity. Some family hatchbacks like the Peugeot 308 and Honda Civic are further ahead in terms of luggage space, but the Citroen offers more luggage space than a Toyota Corolla and exactly matches the Mazda3.

We think it’s a shame Citroen has scaled back the ‘Airbump’ side-protection system as it didn’t just look distinctive – it was designed to shrug off shopping-trolley impacts that would leave other models with dents in the bodywork. 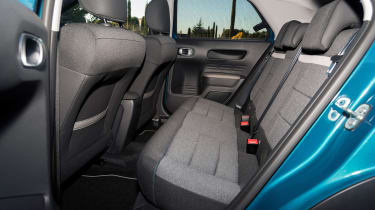 Although the Cactus is very spacious up front, Citroen has saved money by not offering features such as a reach-adjustable steering wheel, so some might find it tricky to get the perfect driving position. Although initially comfortable, the Cactus has spongy front seats that aren’t supportive enough on a long journey and you can’t have adjustable lumbar support, even as an option.

The raised, almost SUV-like, body shape means there’s also a decent amount of space in the back. As a result, there’s room enough for two adults back there – but bear in mind that a panoramic sunroof impinges slightly on headroom.

Storage spaces include a large top-loading glovebox that’s bigger than what you’ll find in most rivals, thanks to Citroen housing the airbag in the roof of the car rather than the dashboard. There are door pockets in all the doors – an added bonus of the rear windows not rolling down – as well as extra storage in the centrally mounted armrest. A neat fuel cap holder is a feature many drivers may fail to spot, but it means the cap doesn't roll off the roof or risk dripping fuel everywhere when not in use. 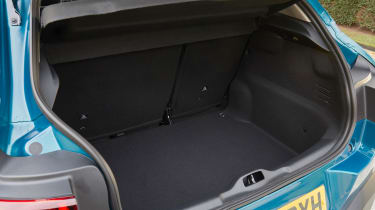 Boot space in the Citroen is decent at 358 litres, just a little less than the Volkswagen Golf’s 380 litres and bigger than the Ford EcoSport’s 350 litres. The rear seats split 60:40 and dropping the entire rear bench frees up a total boot capacity of 1,170 litres.