"With modern, stylish looks, the Citroen Grand C4 SpaceTourer shows an MPV doesn’t have to be boring"

And it’s the latter that gives the big Citroen its first advantage over rivals such as the Ford S-MAX, Renault Grand Scenic and Kia Carens. With its slim headlights and bullet-train styling, the Grand C4 has distinctive looks that only the classy BMW 2 Series Gran Tourer can match.

The futuristic air continues inside, too – the driver sits behind a 12-inch digital information display instead of a traditional instrument cluster, while a central 12-inch HD touchscreen looks after infotainment duties. The panoramic glass roof of higher trim levels floods the interior with light, adding to the modern feel, and the materials used feel sturdy and upmarket. 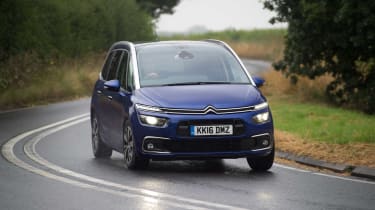 Of course, with a family vehicle like the Grand SpaceTourer, stylish design isn’t worth a lot if it gets in the way of practicality. Fortunately, the Citroen has been very well thought through: there’s loads of space in the front two rows, the second of which has ISOFIX fittings on all three seats. The third row is a little tight for adults, but will comfortably take a pair of children.

The BlueHDi diesels are the most popular engine choices and both are powerful and economical. If you cover fewer than 12,000 miles a year, you may prefer the PureTech 130 petrol, which is a little quieter and smoother.

The range-topping Flair Plus model is more luxurious and has more technology, and accounted for half of sales in 2019. It has Xenon headlights with intelligent beam, active lane departure warning and active cruise control. As well as this, a panoramic sunroof, powered tailgate, folding door mirrors, and blind-spot monitoring are standard on the Flair Plus.

Euro NCAP has only crash-tested the five-seat Citroen C4 SpaceTourer, it says it’s satisfied the Grand C4 SpaceTourer would achieve the same five-star result as its smaller sibling. The range update in 2019 added more standard active safety equipment to the Feel Plus and Flair Plus models. 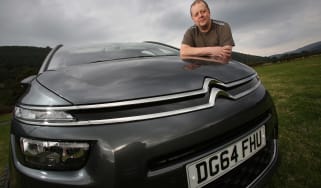 Reader wins £4,400 claim against Citroen after protracted dispute with company
Skip to ContentSkip to Footer