"The DS 3 Crossback E-Tense offers enough range for most people, but it's far from the best electric car on sale" 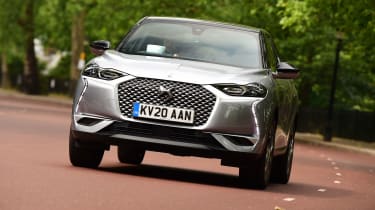 The DS 3 Crossback E-Tense represents DS’ first foray into production electric cars, drawing upon its experience from participating in the electric Formula E racing series. It also has intentions to compete with Audi, BMW, Mercedes and Lexus at the higher end of the market. The E-Tense is the combination of both those factors, and is priced to rival the Audi Q2, Lexus UX and BMW X2, despite sharing its platform with the humble Vauxhall Corsa-e and Peugeot e-2008.

It’s safe to say that the DS 3 Crossback is an alternative choice in the premium small SUV class, but its interesting design - inside and out - is sure to win over some customers. It’s also one of few SUVs available as a full electric car; the Hyundai Kona Electric and Kia e-Niro are its main rivals. We’ve reviewed the DS 3 Crossback E-Tense as a separate model, but DS wants its customers to think of it as just another powertrain choice alongside petrol and diesel engines.

As a result, the E-Tense is offered with most of the same trim levels as the regular car, although it’s also available as a high-spec ‘La Premiere’ version and not in entry-level trim. There are four models to choose from, and all come with a touchscreen, digital instrument cluster, parking sensors and keyless start. It’s slightly disappointing that the most affordable model doesn’t come with sat nav, automatic air conditioning or LED headlights considering the price rise for the E-Tense over similarly specced petrol and diesel models. But, an even bigger sticking point is the fact the cheaper Peugeot e-2008 is almost identical underneath, making the pricey DS look like poor value for money in comparison.

A 50kWh battery and 100kW electric motor (the same powertrain as the Peugeot e-208) combine for a range of 200 miles, while the performance stats are 134bhp, 0-62mph in nine seconds and a top speed of 93mph. These hardly push the envelope of what’s possible with EV technology but a 200-mile range should be enough for the vast majority of potential buyers, while providing more usability than a MINI Electric or Honda e. 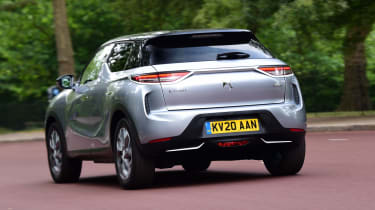 Handily, 100kW fast-charging is available for top-ups to 80% battery capacity in half an hour. When you’re not waiting for the car to recharge, it’s an excellent cruiser. DS has used extra soundproofing and thicker glass to ward off most unwanted road noise; on the motorway, it feels like a much more expensive EV. With soft suspension, the car rides beautifully on good road surfaces but the news is less positive on bumpy roads and through corners. It’s much heavier than an equivalent petrol model, and this extra weight affects the handling.

You’d never buy the DS 3 Crossback for its practicality alone - rivals offer more interior and boot space - but the E-Tense isn’t any less practical than the conventionally powered versions, with the same 350-litre boot space. Being based on Peugeot and Citroen models, the E-Tense should be safe and reliable, and it's a five-star Euro NCAP car so long as certain safety kit is fitted.

The DS 3 Crossback E-Tense is a good EV, let down by an overly high price and meagre standard equipment levels. Compare the DS with an equivalent Peugeot e-2008 or Hyundai Kona and it's hard to make a compelling argument for it, but attractive PCP deals or discounts could change that.

The DS 3 Crossback E-Tense’s SUV styling and size mean it can’t quite match the range of the Peugeot e-208 and Vauxhall Corsa-e with which it shares its underpinnings, but 199 miles should be sufficient for a large proportion of buyers. It's likely to achieve more like 150-170 miles in real-world conditions. If you’re not bothered about the badge on the nose, the Hyundai Kona Electric and Kia e-Niro offer 282 miles of range for a similar price.

One big positive is that the E-Tense can use 100kW rapid chargers, regardless of the spec you choose, allowing for a 10-80% charge in around 30 minutes. DS will also sell you a 7.2kW wallbox for home charging, fully replenishing the battery pack in around eight hours. The MyDS app can be downloaded to allow recharging and cabin pre-heating or cooling from your smartphone. Unlike the closely related Vauxhall Corsa-e, the DS 3 E-Tense also comes with a three-pin plug and 7kW charging cable as standard. 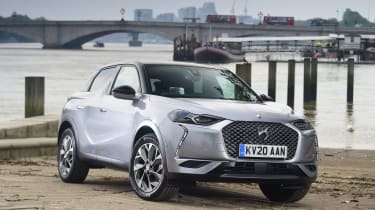 As it’s a zero-emission electric car, VED tax is free for the E-Tense. Company-car drivers will also be drawn to the E-Tense by its 0% Benefit-in-Kind liability in 2020/21, slashing monthly bills.

Just like petrol and diesel DS models, the E-Tense comes with a three-year/60,000 mile warranty. This is what many rivals offer, but the Hyundai Kona Electric and Kia e-Niro both come with more generous warranties. Your DS dealer is likely to offer similar servicing plans to the conventionally fuelled DS 3 Crossback models.

An output of 134bhp means 0-62mph takes nine seconds exactly, and the car’s top speed is 93mph. These figures are hardly anything to write home about but punchy and smooth acceleration will make the E-Tense quick enough for most buyers - especially those used to a small petrol or diesel supermini or crossover. The surge of acceleration tails off at higher speeds but it still has enough in reserve for comfortable overtaking at motorway speeds. There are three driving modes that alter the power output of the electric motor - Sport, with the full 134bhp; Normal, with 107bhp; and Eco, which gives you 80bhp and extra brake regeneration to put more energy back into the battery and maximise range. 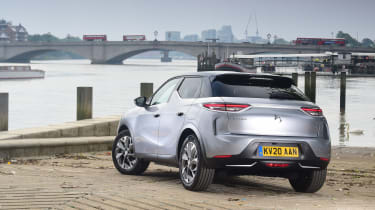 Compared to the petrol DS 3 Crossback models, the E-Tense is around 300kg heavier, and that really makes a difference to the car’s driving characteristics. You can feel the extra weight through the corners, and overall it’s just not as sharp to drive as the Hyundai or Kia - despite the fact neither are aimed at driving enthusiasts. The DS 3's steering is light, with little feedback, but it does at least feel reasonably agile.

At cruising speed on the motorway, the DS 3 Crossback E-Tense is beautifully refined. DS has included extra sound deadening in the car’s construction, and the result is that it feels like you could be driving a much more expensive EV like the Audi e-tron or Jaguar I-Pace.

While it’s comfortable on smooth tarmac, the DS 3 Crossback E-Tense isn’t so good on neglected sections of road. If you live in an area with plenty of potholes, you’ll find that the E-Tense thumps into ruts and potholes more than the standard model, and some jolts can go straight through the cabin.

The interior does win some points back for its style. Like nothing else on sale right now, the DS 3 Crossback employs a diamond theme for much of the interior design. The air vents and dash controls are set out in eye-catching diamond patterns, and the touchscreen and digital instrument cluster look like they’re borrowed from a more expensive car. You’ll have to use the touchscreen to adjust the heater controls, however, which can be frustrating on the move, and the Peugeot e-2008's 'iCockpit' setup is arguably even more arresting and just as upmarket for less money. 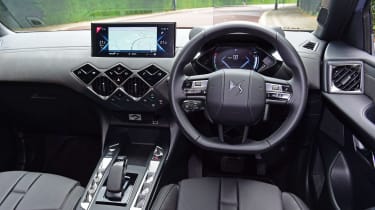 With the E-Tense commanding a much higher price tag than the petrol and diesel models, we think the Performance Line misses out on some key equipment. Upgrading to Prestige costs £2,000, so you’ll need to work out whether it’s better to go for the higher spec or add the specific extras you want from the options list. More worryingly, the E-Tense doesn't look like good value next to the Peugeot e-2008, which is around £5,000 less expensive despite having similar kit.

No less practical than the standard DS 3 Crossback, but the E-Tense still falls short of rivals

By stowing bulky elements of the electric powertrain under the bonnet, DS has managed to keep as much space in the E-Tense as in the regular model. The rear seats of a family hatchback like the Audi A3 are still much more accommodating, though. We found the back doors of the E-Tense to be quite narrow, so it won’t be as easy to install child seats as in other small SUVs. The ‘floating’ roof and the thick windscreen pillars affect visibility, as well. 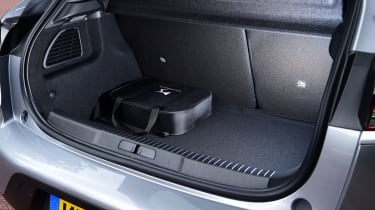 On top of that, you’ll have to compromise on boot space. There’s 350 litres to fill with the seats up, which is small compared to family hatchbacks and rival SUVs. The Volkswagen T-Roc and MINI Countryman both offer around 450 litres. You’ll also have to lift your shopping over quite a big boot lip.

It's worth noting the E-Tense only gets a five-star Euro NCAP rating when you invest in one of the extra safety packs. A four-star rating applies to lower-spec models that miss out on the blind spot detection and extended lane-keeping assistance of the Advanced Safety Pack. Top-spec La Premiere features the Premium Safety Pack, which also brings speed limit recognition, high-beam assist and adaptive cruise control. Autonomous emergency braking and lane-departure warning are fitted as standard. 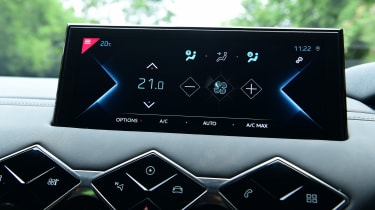 Doubts remain over the aftersales experience and reliability of DS models. The DS 3 Crossback didn't feature in our 2020 Driver Power ownership satisfaction survey, but DS as a brand came in 22nd place out of 30 manufacturers - up from 28th in 2019. DS models were praised for their engines and styling but the brand could only muster 27th for reliability, with 28.2% of owners reporting a fault within the first year.