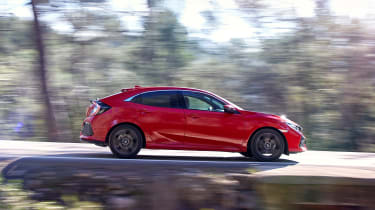 Anyone considering a new Honda Civic would do well to make a like-for-like comparison when it comes to safety equipment. In doing so, you’ll probably be impressed with how much protective equipment Honda provides as standard. According to owners, the Civic's infotainment is disappointing, and many had faults in the first year of ownership, but Honda has a good reputation for engineering robust cars.

The current Civic hasn't proved as reliable as Honda buyers might have hoped, finishing in 39th place from 75 cars in our 2020 Driver Power customer satisfaction survey. In the results, a worrying 18.4% of Civic owners reported a fault within the first 12 months of ownership, and the most common faults related to the electrics.

Prospective customers shouldn’t be disappointed the Civic only originally scored four out of a possible five stars after independent Euro NCAP crash testing in July 2017. While a 92% score for adult occupant protection shows the Civic is certainly a strong, it was let down by a score of 67% in the child occupant safety category. In a side-impact test, the curtain airbag failed to fully prevent the head of a 10-year-old dummy from striking a hard surface.

Since then, Honda has redesigned the airbags in question, and when Euro NCAP tested the Civic again it achieved the full five stars, with a 75% score for child occupants. This higher safety rating will apply to all Civics built after 25 September 2017.

All Civics, regardless of trim, come with autonomous emergency braking (AEB), which has been heralded as one of the more significant safety systems to have emerged in recent years. Experts estimate AEB reduces rear-end collisions by as much as 38%.

But it’s not just AEB you get as standard: Honda’s ‘Sensing’ suite of systems also includes adaptive cruise control (which can match the speed of the car in front), a lane-departure warning system (which helps keep the car in lane) and traffic-sign recognition (which uses a camera to read speed limit signs and the like, beaming the information onto a screen by the dashboard dials). This last system also works with the adaptive cruise control, helping you avoid breaking the speed limit.