While the latest Honda Civic has lost the previous car’s ‘magic’ seats, it remains a practical proposition

The outgoing Honda Civic had something of a party trick in its ‘magic’ rear seats, which would flip up, cinema-style, to reveal a flat and easily accessible load area. Honda says that as natty as these were, few owners used them, so the latest Civic’s rear seats have been robbed of the magic. Dispensing with them has facilitated placing the Civic’s fuel tank lower down, though, which reduces the car’s centre of gravity for improved handling. You can still get the Magic Seats in the Jazz and HR-V.

Despite this change, the Civic is a practical car. The only downside of note is that rear headroom is tight for six-footers, but elsewhere the news is better. There’s plenty of legroom in the rear and interior cubbies abound, while neat touches – like the large central cubby and wire-tidying clips behind the gearlever – clearly indicate thought has been put into how owners will use their Civics. 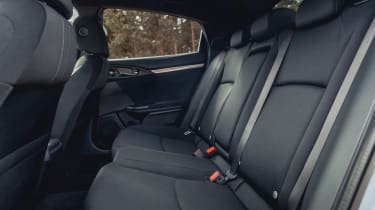 The latest Honda Civic’s boot is big and clever. Most models have 478 litres of storage, which is around a hundred litres more than the Golf, Astra and Focus, but the Sport and Sport Plus models don't give you a removable boot floor and capacity reduces by 58 litres. You can expand the Civic’s carrying capacity to 1,580 litres if you lower the rear seatbacks. Although the space isn’t perfectly square thanks to a fair amount of intrusion from the rear wheelarches, the sheer volume on offer makes this easy to overlook. 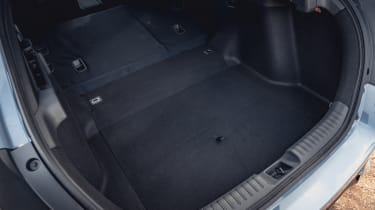 The boot’s cleverness comes from a sliding ‘tonneau’ style parcel shelf, which extends from and retracts into a small plastic box on the side of the boot. This a) saves space and b) ensures when carrying large items that require more room, you don’t have to accommodate a bulky parcel shelf as well as your belongings. It’s a neat trick.

The diesel Civic is the engine of choice for those seeking to pull a caravan or trailer, as it manages 1,400kg, whichever gearbox you pick. The 1.0-litre petrol engine can tow 1,200kg, while the 1.5-litre engine can pull up to 1,000kg. That’s assuming you choose the manual gearbox, though: pick the CVT automatic and those capacities drop to just 800kg. Disregard the automatic, and you should be able to tow a small to medium sized caravan, but the Civic is only likely to be a mediocre tow car compared with rivals like the Skoda Octavia, many versions of which can tow up to 1,800kg. You can't tow with the Sport model because it has centrally mounted exhaust pipes.