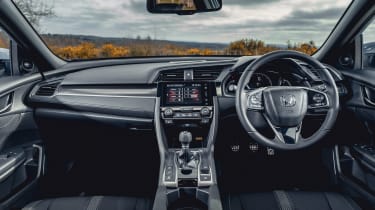 While the previous generation of Honda Civic had a futuristic and very individual interior design, it wasn’t the last word in user-friendliness. Fortunately, the latest Civic introduces a welcome dose of clarity. It’s a shame, though, that the concept-car looks of old have been replaced with something quite so prosaic; rivals such as the Peugeot 308 have a far more interesting and imaginative look.

Everything feels well screwed-together, although the soft-touch surfaces in the most prominent places jar harshly with the rather brittle materials found elsewhere. The seats are comfortable and the ride quality is good whether travelling slowly or at speed. Generally, the Civic is a very comfortable car in which to travel. 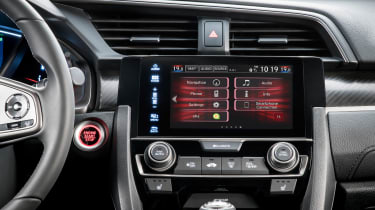 The latest Civic has a far less outlandish look than the two-tier setup of the previous model – its more traditional layout is cohesively designed and makes for a pleasant place in which to sit – although newer rivals have the edge on style. The Volkswagen Golf, for example, still trumps it for maturity and conservative plushness, but the Civic can now hold its head high in a competitive market. Almost every surface is fashioned from high-quality, soft-touch plastics and a sense of logical durability abounds.

It’s a shame Honda’s seven-inch Connect infotainment system is some way off the competition in terms of outright usability and isn’t standard. It’s packed with features, though, and you can bypass the fiddly navigation features through Apple CarPlay or Android Auto, and use your smartphone's navigation instead.

Honda offers most trim levels on the 1.0-litre engine, while the 1.5-litre unit is only available with Sport trim. Impressively, all Civics come with Honda’s ‘Sensing’ safety package, which includes autonomous emergency braking and adaptive cruise control – big extras many manufacturers make you pay more for.

SE is the cheapest and best-value model in the range, but it’s still tempting to upgrade to SR, which brings the Honda Connect infotainment touchscreen system together with 17-inch alloys, a reversing camera and dual-zone air-con. The Sport Line trim includes deeper bumpers and side skirts finished in gloss black, along with door mirrors in the same shade. Its leather seats get red stitching and the Sport Line model is available in white, red or blue paint finishes. High-spec EX and EX Sport Line models have leather seats (heated in the front), keyless entry, a panoramic sunroof and an upgraded stereo, but carry a price tag that overlaps with some pretty tempting premium competition. 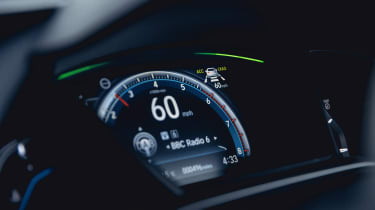 Like many manufacturers, Honda has bundled some extra equipment together into packs. The ‘illumination and sophistication’ pack brings ambient lighting and illuminated door sills, while the ‘touring and organisation’ pack adds boot dividers and protective rubber mats. The Black Line and Orange Line packages, meanwhile, cap the wing mirrors, spoilers and side skirts in their namesake colours.