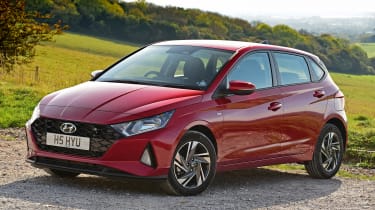 There's just one engine available in the Hyundai i20 initially, so you won't have to worry about scouring the brochure - or this review for that matter - to decide which to pick. Instead, it's a question of whether the Hyundai stands up to its rivals, of which there are many.

The 1.0-litre turbocharged petrol engine benefits from a 48-volt mild-hybrid setup, which works silently in the background harvesting energy and storing it in a small battery pack. This can be used to power the car's systems, improve the stop-and-start system and give acceleration a helping hand, taking some strain off the engine and boosting fuel-efficiency.

Clever fuel-saving tech doesn't end there because the gearbox can also decouple from the engine when your foot is off the accelerator, increasing fuel-efficiency by 3-4% by itself. Hyundai has also gone to significant efforts to make the i20 lighter, and together, all these measures give it an official figure of up to 55.4mpg - an increase from 48mpg in the old model.

CO2 emissions of 118g/km ensure it won't break the bank for company-car drivers paying Benefit-in-Kind tax, and it costs £150 a year in VED. 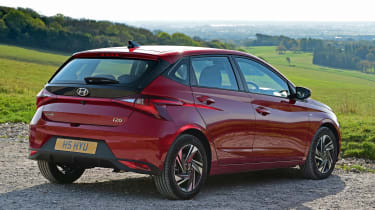 Insurance rankings for the latest Hyundai i20 haven't been confirmed yet but its affordability, reliability and small petrol engine should ensure it's affordable to cover for most drivers. The outgoing model spanned groups six to 15 out of 50.

Hyundai scores here because while its five-year/unlimited-mileage warranty isn't quite class-leading (some rivals offer seven years of cover), we think it will satisfy most buyers while exceeding the length of most lease deals. It also makes the three years of cover offered by the likes of Ford and Volkswagen look rather short.

Hyundai offers fixed-price servicing plans that are well worth considering as part of the deal. Costing around £500 for three years and £1,000 for five years, they cover all routine maintenance and can be paid monthly, making the cost of ownership more predictable.