On twisty country roads, the Ioniq feels eager enough thanks to its relatively low weight and firm ride, but at the same time it’s not what you’d call an engaging driver’s car in the mould of the Ford Focus, and the Toyota Prius is slightly more fun to drive. The steering is quite light, but it can be made heavier (artificially so, it must be said) by selecting the car’s Sport driving mode. Because it doesn’t have as low a centre of gravity as the Electric version (which has very low-mounted batteries), the Hybrid doesn’t feel quite so composed and stable during direction changes. It can’t match its electric sister’s immediate responses, either.

There’s a degree of sharpness to the way the Ioniq copes with poor road surfaces, but for the most part its suspension deals with bumps and ruts well, keeping you and your passengers reasonably well-cushioned against the worst road surfaces. It’s still bumpier around town than we’d like, though. 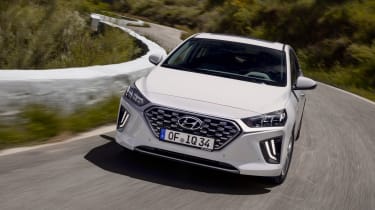 The Ioniq Hybrid glides away in virtual silence, but as the speed builds it’s easy to feel the point at which the 1.6-litre petrol engine kicks in. This engine was designed specifically for this application and working alongside an electric motor its combined power is 139bhp. This is enough to see the car get from 0-62mph in 10.8 seconds, or 11.1 seconds when equipped with 17-inch alloys. The big difference between this car and the Toyota Prius is its gearbox.

One factor that ought to work strongly in favour of the Ioniq is that it uses a six-speed dual-clutch automatic gearbox, the kind more commonly found in petrol or diesel-powered cars. In contrast, the Prius uses a CVT-type automatic, which drones under acceleration and isn’t much fun to use. In theory, this should give the Ioniq an advantage from behind the wheel but the unfortunate reality is that the gearbox is smooth but fairly sluggish, and you can get an odd surging sensation when cruising on the motorway as the car juggles with the power from the petrol engine and the electric motor. However, this is partially redressed by the brakes, which are much smoother than the Toyota’s. You can also use steering-wheel mounted paddles to increase the regenerative braking effect of the electric motor, which slows the car to a crawl in its highest setting. 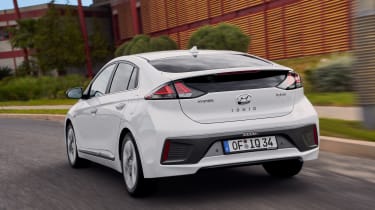 We found it frustratingly difficult to keep the Ioniq Hybrid in electric-only mode. While this is a relatively common characteristic with hybrid cars, Hyundai claims the Ioniq can be driven via the batteries and motor at speeds up to 75mph, but we struggled to keep it in pure EV mode above 40mph. The hybrid setup also switches between petrol and battery power too frequently for our tastes, because the 1.56kWh battery capacity isn’t enough to propel the car very far.

For driving impressions of the Hyundai Ioniq Electric, see our full review.