Jaguar as a brand has a reputation for producing performance cars and the E-Pace engine range is skewed towards providing decent power rather than the best economy. The E-Pace is by no means a class-leader in economy terms, so you’d be better off in one of its rivals if running costs are a concern. The most economical Audi Q3, for example, is capable of 42.2mpg and the equivalent BMW X1 is even more impressive at 56.5mpg. The most economical E-Pace will do 42.7mpg.

Owning a Jaguar is by no means the cheapest option but on most engines you can take comfort in the knowledge that you’re making a small sacrifice in this regard for better performance, rather than simply buying a car that is inherently uneconomical. 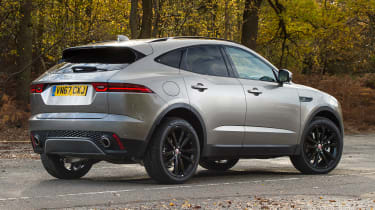 The most economical E-Pace is the D150, which is the entry-level, front-wheel drive diesel. It claims fuel economy of 42.7mpg and CO2 emissions of 143-146g/km on 17-inch wheels, with economy falling slightly if you opt for bigger wheels. The same engine with four-wheel drive returns fuel economy ranging from 37.9mpg to 41.8mpg and 146-148g/km – opt for an automatic gearbox and this falls again to between 36.5mpg to 39.5mpg and 158-162g/km of CO2. With the additional 4% tax on diesel fuel, even the D150 occupies the top two Benefit-in-Kind (BiK) brackets for company-car drivers.

The range-topping D240 diesel comes with an automatic gearbox and four-wheel drive as standard, resulting in economy of 34.4mpg to 37.1mpg and CO2 emissions of 175-178g/km. Both D180 and D240 models currently occupy the top BiK bracket.

All three petrol engines are relatively powerful and they come with automatic gearboxes and four-wheel drive, so they aren’t cheap to run. The P200 and P250 claim between 27.8-30.1 and 27.1-29.8mpg with CO2 emissions of between 182-189g/km, while the P300 returns up to 28.3mpg with CO2 emissions of 199-203g/km. All of these models comfortably sit in the top BiK band, so none are particularly appealing for company car drivers. The petrol E-Paces offers similar economy to the Audi Q3 40 TFSI, but the BMW X1 xDrive20i is slightly more efficient at 38.7mpg.

All versions of the E-Pace will be slightly less efficient with larger alloy wheels. Road tax is £150 per year but be aware that the E-Pace range straddles the £40,000 threshold, so some of the more expensive models will incur a £325 surcharge, bringing the total road tax bill to £475 during years two to six of ownership. This will also be the case if your E-Pace costs less than £40,000 but you spend enough on optional extras to take the cost above this amount, which is easy to do.

The entry-level E-Pace P150D sits in insurance group 24, while upgrading to the P180D bumps this up to group 29, several groups higher than the equivalent Audi Q3. Choose a P240D in HSE trim and it’s seven groups higher. The basic petrol P250 starts in group 34, while the range-topping HSE R-Dynamic P300 is in group 40 out of 50 – matching the BMW X3 M40i.

Jaguar provides a three-year warranty on all its new cars, which is very similar to those provided by Audi, BMW and Mercedes. There is the option to buy an extended warranty to cover the car when the first three years has elapsed.

Service intervals are every year and you have the option to purchase a five-year/50,000-mile service plan, priced according to whether you have a petrol or diesel E-Pace.