The Jeep Renegade is excellent off-road, but feels vague on it. If you want an accomplished tow car, go for the 2.0-litre diesel

With more direct, responsive steering and a tighter turning circle, the Renegade could actually be quite fun to drive. But the MINI Countryman and Ford Puma are still the rivals to go for if you want a driver-focused small SUV. As it is, the Jeep offers plenty of grip, but not much in the way of driver fulfilment on road.

Things are put into sharp perspective, though, by the Renegade’s more off-road-focused four-wheel-drive variants. On rough terrain, those on-road handicaps are transformed into advantages. The heavily damped steering prevents harsh bumps being transmitted to your hands and its slow action makes careful low-speed manoeuvres easier. Despite these impressive capabilities, the Renegade doesn’t feel at all intimidating if you’re moving up from a regular family hatchback. 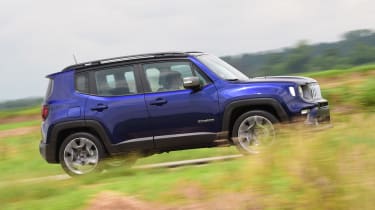 You can only have the diesel engine if you go for the Renegade Trailhawk, which is by far the most accomplished off-roader in the range. It's nearly unstoppable with the powerful diesel engine and Jeep's nine-speed automatic gearbox. At the flick of the switch, you can engage special low gears that allow the Jeep to keep ploughing on in the trickiest conditions.

Gone are the dated 1.4 and 1.6-litre engines, replaced with more modern equivalents. The three-cylinder 1.0-litre has 118bhp, while the four-cylinder 1.3-litre is available with 148bhp and 178bhp. You’re limited to the entry-level Sport trim on the former, while the latter is available on Longitude and Limited trim levels.

We’ve tried both the 118bhp and 148bhp petrol engines, which come with six-speed manual and six-speed automatic gearboxes respectively. These are quick enough for most of the Renegade’s target audience, getting from 0-62mph in 11.2 seconds and 9.4 seconds accordingly. Elsewhere, things are more mixed. Both are quiet on the motorway, but can sound raucous at higher revs. More frustratingly, the engines don’t feel as smooth as we’d like, with a tendency to hesitate that we had hoped would be ironed out of productions cars before they reached customers.

The new 178bhp engine has all-wheel drive (read our guide to the differences between all-wheel drive and four-wheel drive), and it’s linked to the same nine-speed auto as the diesel. This is the fastest model in the range, hitting 0-62mph in 8.5 seconds.

Two plug-in hybrid 4xe versions of the Renegade were introduced in 2020, bolstering the power of the 1.3-litre petrol engine with a 59bhp electric motor. As standard the 4xe provides up to 187bhp but the Trailhawk gets 237bhp for extra performance. Petrol power is sent to the front wheels, while the electric motor drives the rear axle to provide four-wheel drive.

The Renegade 4xe feels comfortable to drive, with almost no powertrain noise in its electric mode, accompanied by smooth suspension and decent seats. The Trailhawk offers excellent performance and works even better off road than the regular model, thanks to its extra pulling power. So far as small SUVs are concerned, only a Range Rover Evoque would be able to compete with the Renegade over difficult terrain.

There's also a Sport mode but it's probably best left alone, because the six-speed automatic gearbox feels lethargic and holds on to gears for too long. With a 0-62mph time of 7.5 seconds (7.1 seconds for the Trailhawk), the Renegade 4xe is the fastest version in the line-up, but it doesn't really have the body control, steering precision or grip to make the most of the extra pace. It rides smoothly, however, and its electric motorway can happily get it to motorway speeds with no help from the petrol engine.