Jeep doesn't have a great reputation for reliability, and a three-star safety rating is below par

Jeep doesn't have a great reputation for reliability, but parent company Fiat’s reputation is getting better. Euro NCAP initially awarded the Renegade five stars for crash protection, but the score was revised in 2019 and now the Renegade has a rather disappointing three-star score.

The Jeep brand's reputation for reliability isn't the best. While it finished 11th in our Driver Power 2016 owner satisfaction survey, not enough Jeep owners responded for it to be included in our latest results. Parent company Fiat came 23rd out of 30 brands, with 13.8% of owners reporting a fault during the first year of ownership. The Jeep Renegade shares many of its mechanical parts with the Fiat 500X. 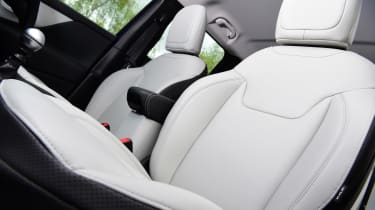 Euro NCAP retested the Jeep Renegade in late 2019, and reduced the car’s five-star rating down to three. It scored 82% for adult protection, 84% for child protection, 55% for pedestrian protection and 58% for safety assistance. The Renegade is still a safe car, but its rating pales in comparison to almost all its rivals; many small SUVs have five-star ratings.

A range of safety systems are available. All models get a handful of airbags, traffic sign recognition, speed assistance, a lane-departure warning system and a speed limiter, plus rollover mitigation that stops the car tipping over during emergency manoeuvres. Go for one of the four-wheel-drive models and you also get excellent grip for safe progress, even on slippery roads.

Plenty of optional safety features means it's easy to make the Renegade safer. Top of the list has to be the automatic braking system that can lessen the damage of a low-speed crash or even avoid one completely. Also on offer are blind-spot warning systems and rear cross protection, which keeps an eye out for vehicles approaching the back of the car when you're reversing.

If you spend a lot of time on the motorway, it's worth considering active cruise control. Like normal cruise control, it'll maintain a preset speed, but it can also slow the car if a vehicle moves into the lane in front of you, before returning to the preset speed when the road is clear again.