With a boxy shape, the Jeep Renegade offers lots of interior space, although rear legroom might be a problem for taller adults.

The Renegade's boxy looks might not appeal to everyone, but they make for a generous amount of space inside. In the front, there's a good amount of shoulder and headroom and that goes for the back seat, too. However, the rear gives clear priority to the two outside seats – the middle perch is really best suited for children. Despite the vast headroom, kneeroom is no better than in a MINI Countryman.

Spend some time in the Jeep and you’ll get used to plenty of storage areas dotted around the interior, including a glovebox and two cup-holders between the front seats. Electrical devices are also catered for thanks to a 12v charge point, USB ports and an auxiliary port allowing you to connect your MP3 player to the car's stereo. The facelifted model boasts some improvements, with a smartphone holder built into the dashboard, new cup-holders and some extra storage space. 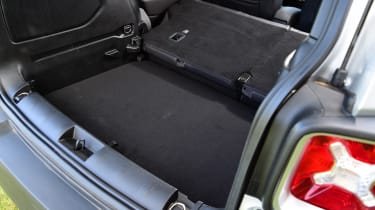 The boot holds 351 litres with the seats up and 1,297 litres with them folded down, although the shape of this load compartment is less useful than you might expect given the car’s boxy looks. In fact, the SEAT Arona has a boot capacity of 400 litres and is easier to get three large suitcases into, while the MINI Countryman does better still. It boasts a 450-litre boot, while total capacity with the rear seats down is an impressive 1,390 litres.

Nonetheless, the Jeep does have some versatile features, including a fold-forward front seat that means you can carry long items, as long as they don’t exceed the length of the car’s interior. 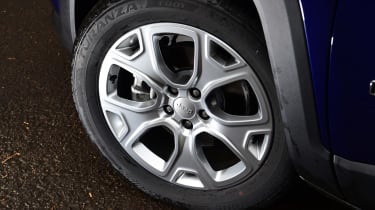 As with most SUVs, the Renegade’s big boot opening makes it easy to load large items such as bicycles, although the boot lip can make it tricky to slide items aboard. Only high-specification models get three-way split folding seats, but if you regularly carry mucky sports kit or a wet dog, you'll appreciate the reversible, wipe-clean boot floor that can also be adjusted for height.

Also, choose the My Sky removable roof panels and the Jeep's boot offers a somewhere to store them, complete with a protective bag.

If you plan to use your Renegade for towing, then the 2.0-litre diesel is the best choice. It can pull up to 1,500kg and its powerful engine allows the Jeep to cope better with steep gradients and overtaking.