The Jeep Renegade is cheap to run for such a capable off-roader, but more road-biased rivals have lower emissions

Jeep has now revealed the Renegade's fuel economy figures, but it’s likely a number of the Renegade’s compact SUV rivals will still be less expensive to run in the real world. The Jeep's boxy shape will blunt economy, while four-wheel-drive models are considerably less frugal.

The Renegade is powered by a choice of Fiat-sourced Multijet diesel and Firefly petrol engines. The most economical is the entry-level 1.0-litre petrol, which can achieve up to 52.3mpg when fitted with the manual gearbox and two-wheel drive. Upgrading to the 1.3-litre petrol engine only sees fuel economy drop to 51.4mpg but it makes the car much faster and more powerful. This engine is mated to a six-speed dual-clutch automatic.

There’s now a 178bhp version of the 1.3-litre engine, but it comes with four-wheel drive and a nine-speed automatic as standard. Having four-wheel drive is near-essential for off-road driving, but it does mean you’ll struggle to see over 40mpg. Likewise, the 2.0-litre diesel has standard four-wheel drive, and the sole 168bhp option returns just shy of 45mpg.

Jeep has now published CO2 emissions figures from the much stricter WLTP testing regime, so company-car drivers may be faced with a larger bill. Even the entry-level model attracts a high Benefit-in-Kind (BiK) rate. Higher emissions push the top petrol and diesel into the top 37% band.

For lower running costs, the Renegade 4xe plug-in hybrid could be the solution. Its 11.4kWh battery pack and electric motor means it can drive up to 25 miles using no petrol at all. Alternatively, in Hybrid mode, the car's on-board computer decides when to deploy electric or petrol power, and the battery’s charge can be saved for use later on - say when you drive into a city.

Official CO2 figures from 47-53g/km place the 4xe in a low BiK band for business users, and reduce the cost of annual VED by £10 to £140. Fuel consumption is quoted as up to 134.5mpg but, like all plug-in hybrid models, this will greatly depend on how often the owner tops up the batteries and their driving habits. Longer trips with a depleted battery will see much higher fuel consumption than local trips with a fully charged battery. 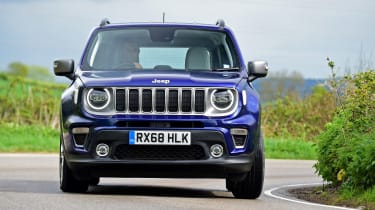 The Renegade falls into insurance groups 10 to 18, with the less powerful front-wheel-drive versions being predictably cheaper to cover than the more powerful four-wheel-drive models.

Like all Jeeps, the Renegade comes with a five-year/75,000-mile warranty, an upgrade to the old three-year/60,000-mile warranty that was offered until July 2018. It’s part of a campaign called ‘5-3-5’, so named because customers get a five-year warranty, a three-year servicing programme and five years of roadside assistance. This gives the Jeep’s warranty an edge over the three years offered for rivals from SEAT, Renault, Skoda and Nissan. Hyundai matches Jeep’s five-year warranty (but with no mileage cap), while Kia, MG and SsangYong provide an impressive seven years of cover.

You can opt for Jeep's 'Easy Care' service plan which means you can pre-pay for your services, including all parts and labour. A three-year plan costs around £400 for a petrol model and £500 for a diesel version. Petrol engines need to be serviced every year or 9,000 miles, whichever comes first, while it’s every year or 15,000 miles for diesel engines.