The latest Rio certainly benefits from its revised engine range compared to the old model, which was noticeably lagging behind rivals in performance terms by the time it was replaced. The only trouble is that, like so many other areas in which the Rio has improved, it still doesn’t come close enough to the class leaders in terms of driver enjoyment.

The 1.0-litre turbocharged three-cylinder engine is a great fit for the Rio. The 99bhp version can power the car from 0-62mph in 10.3 seconds, while the 118bhp version takes 9.8 seconds, making those two the quickest in the line-up. The engine sounds good and feels punchy, but sadly it isn’t as flexible as any of the equivalent 1.0-litre engines in the Vauxhall Corsa, Ford Fiesta and Volkswagen Polo.

The Rio’s rivals from the Volkswagen Group, namely the Polo, SEAT Ibiza and Skoda Fabia, also offer buyers a 1.0-litre turbocharged petrol, and this is a quieter and more refined option than the Rio’s 1.0-litre, too. 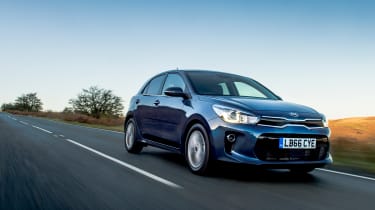 The average Rio buyer is unlikely to be eyeing up epic trips on the UK’s best driving roads as they pull out of the dealership, but it’s still a shame the Rio isn’t more fun to drive. The Ford Fiesta is excellent in this respect, and even the latest Nissan Micra is more engaging than the Rio. The Rio suffers from very dull steering and on the move it can’t match either the agility of the Fiesta or the ride quality and comfort of the Polo.