Kia says that the number of three-door Rios it sold was miniscule, so the latest version is now five-door only. While single people and couples may rue the chance to save a few hundred pounds by buying a three-door, it does at least mean every Rio buyer now benefits from the practicality of having doors for the rear seats.

Interior space in the Rio is pretty good, while the boot is one of the biggest in the supermini class. Only Honda Jazz owners get a significantly more practical car for similar money.

Any rear-seat passenger sitting behind a tall driver will find legroom pretty tight, but headroom in the back is enough for adults to sit up straight without feeling cramped. 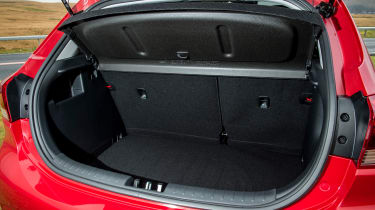 Boot space is one of the Rio’s strongest suits, with its 325 litres of space surpassing that of the VW Polo, Ford Fiesta and Vauxhall Corsa. The boot of the Skoda Fabia is slightly bigger, though, while a Honda Jazz has nearly 30 litres more. The Jazz also has its neatly folding ‘magic’ seats, which offer added practicality over the Rio, too.

The Rio is only suitable for light towing such as a small trailer rather than a caravan, with maximum braked towing weights ranging between 800kg and 1,100kg.