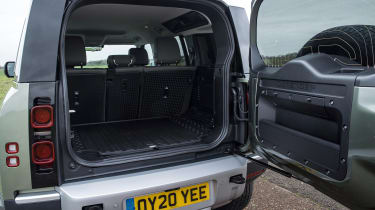 Like the rest of the Defender's attributes, the practicality on offer is also highly flexible and customisable. The biggest decision facing buyers will be whether to go for the five-door 110 model, or the three-door 90. An even larger Defender 130 with eight seats is also expected to arrive later on.

Choose the three-door 90 and the Defender can still carry up to six people. That's thanks to a unique jump seat between the front seats, made possible by the dashboard-mounted gearlever. It's big enough for kids, and when the optional middle seat isn't in use, folding it forwards transforms it into a large central armrest and cubby. The biggest sticking point is the lack of rear doors because anyone getting in the back has to climb rather high to negotiate the front seats.

The 110 is also offered in a 5+2 layout, which is Land Rover speak for adding two smaller seats in the boot. These are best suited to kids but adults may also be able to travel for shorter hops in a pinch.

There are also handy features like USB or 12-volt power sockets for charging portable devices, a backpack that secures to the rear seat and 'click and go' system for middle-row passengers to attach tablets, bags, laptops and jackets. Then there are innovations like the side mounted 'Gear Carriers' that are 24-litre lockable and waterproof containers that mount on the Defender's rear window pillars in a similar fashion to motorcycle saddle bags. 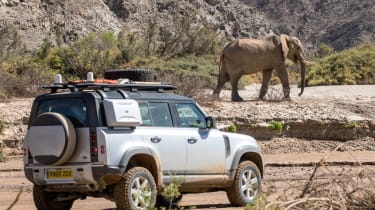 The five-seat Defender 110 has 1,075 litres of cargo space behind the seats, expanding to a massive 2,300 litres when the seats are folded down. A rubberised floor is designed to shrug off spills and be brushed or wiped clean. The Defender 90 is notably less spacious, with a shallow 397-litre boot that's smaller than a Honda Civic's.

It's worth noting that the Defender has a traditional side-hinged tailgate, not a hatchback like most of the SUVs currently on sale. This can be fairly heavy (it also carries a full-size spare wheel) and will require some room behind the vehicle to open fully. However, it does open on the correct side for UK roads, with the opening towards the kerb, and is a characterful nod towards its predecessor.

Defenders have long been used for towing, and the latest version is seriously capable. It can pull a 3,500kg braked trailer, and the Defender itself has a maximum payload of 900kg. It can also accept a static load on its roof of up to 300kg.