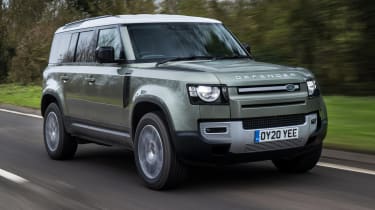 Defender buyers will be able to choose between diesel, petrol and mild-hybrid power, depending on what suits their needs and driving habits the best. Sadly, none provide especially low running costs.

Land Rover clearly prioritised performance, versatility and rugged looks over fuel-efficiency - just as they did with the original. Even the most economical version of the new Defender just manages to tip over 30mpg, while (WLTP) CO2 figures north of 230g/km mean company-car drivers will face a hefty Benefit-in-Kind bill.

Unlike the original Landie, which had the same commercial status as a van or pickup, the new Defender 90 and 110 are classed as private vehicles, so business owners won't be able to claim the VAT back. At least until a more van-like Defender Commercial arrives later on, that is. We also expect a petrol plug-in hybrid will arrive in due course, as Land Rover has committed to a strategy of electrification for all its models - details have yet to be confirmed. 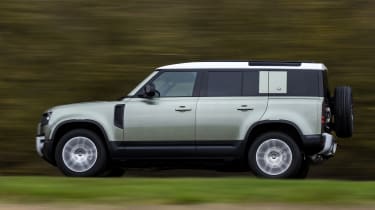 These have been replaced for 2021, with a new 3.0-litre straight-six diesel engine boasting mild-hybrid tech. The D200 version of this engine can manage up to 32.5mpg, exactly the same figure as the more powerful D250 model. Both also officially emit the same 228g/km of CO2.

The 2.0-litre turbo petrol P300 can manage around 25mpg with emissions of over 250g/km, the same ballpark figures as the 3.0-litre P400 mild hybrid. Thanks to its 19.2kWh battery pack, the P400e plug-in hybrid can manage up to 27 miles on electricity alone, giving it official figures of 85.3mpg and CO2 emissions of 74g/km. This should make it the cheapest Defender to run by some margin  and the only one on company-car shopping lists. It also just qualifies for free entry into the London Congestion Charge zone, sneaking under the current threshold by 1g/km.

The battery can be charged at home using a 7.2kW wallbox, taking it from 0-80% in two hours. It will also be possible to use a 50kW rapid-charger (using the supplied cable), for an 80% charge in 30 minutes.

Insurance groups for pricey, complex SUVs tend to be a bit higher than for normal cars. That's certainly the case here, because even the entry-level D200 sits in group 31 out of 50, while the D240 First Edition sits in group 38. That's the same rating as the P300 petrol receives in SE trim, while the P400 X is in group 44.

Land Rover provides a three-year/unlimited-mileage warranty with its new models, which matches BMW and Mercedes. It's not as generous as some brands, though; the Kia Sorento comes with a seven-year warranty as standard.

Land Rover offers servicing plans that can help spread the cost of maintenance, so they're worth exploring with the dealership. It's also worth noting that diesel engines require AdBlue top-ups every so often.