The Land Rover Discovery Sport feels agile and composed on the road, yet the range of equipment offered means it's extremely capable off-road too. The facelifted Discovery Sport borrows heavily from the second-generation Range Rover Evoque, which is a good starting point. But the Sport uses a completely revised rear suspension system, primarily to increase interior space.

At low speeds, the suspension can be firm with the odd jolt from poor road surfaces, which copes better at higher speeds smoothing out the road imperfections, making for a very quiet and comfortable long-distance cruiser.

It boasts improved handling as well, while not exactly matching the ‘Sport’ name. The steering is car-like and impressive for an SUV and does react quickly making it good fun to drive on a twisty road, and better than the softer Volvo XC60. It’s just a shame there’s not much feedback through the steering wheel, which can make it harder to judge what the front wheels are up to. Even so, there’s plenty of grip thanks to the four-wheel-drive system and that raised driving position meaning the Sport is easy to drive. The BMW X3 is firmer still, but this limits its off-road ability. 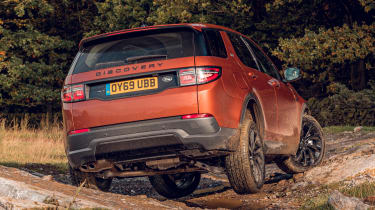 Four-wheel drive is the Discovery Sport's selling point. Even if you don't plan to take the car off the road, it’s good to know the Terrain Response system will always optimise grip. You can choose to tweak the setup to tackle a variety of surfaces, such as mud, sand, snow and rocks. When the terrain gets more rugged, though, the Disco Sport takes it all in its stride - from faster off-road tracks to light green laning or even mud-laden downhill sections.

The Sport will also wade through up to 600mm of water, and because there isn't much bodywork overhanging the front and rear wheels, it can traverse deep ruts and ravines like few other cars of its type.

The diesel engine range gets a mild-hybrid setup, which recovers energy as the car slows down that can be used to assist the engine at lower speeds. Just one diesel engine is available in the Sport: a 2.0-litre Ingenium diesel. Along with offering better fuel economy and lower emissions, the new engine is also smoother and quieter than the clattering 2.2-litre that powered the Sport's predecessor, the Freelander. Improved engine mounts and a stiffer chassis have also made the updated 2019 Discovery Sport noticeably more refined.

Available in two power outputs (badged D165 and D200), the entry-level version takes around 9.5 seconds to get from 0-60mph and has a top speed of 112mph, which is a little off the pace of some rivals. The D200 cuts the acceleration time to just over eight seconds, increasing top speed by 5mph. 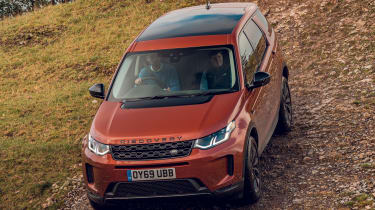 The entry-level 161bhp engine is also offered with front-wheel drive, providing better fuel economy, with no real penalties during day-to-day driving. If you don’t plan on heading off-road or towing a heavy trailer, this shouldn’t be seen as too much of a negative.

Now available as a plug-in hybrid (PHEV) for the first time, the Discovery Sport P300e uses a 1.5-litre three-cylinder petrol engine that drives the front wheels and a 107bhp electric motor powering the rear axle. A 15kWh battery supplies power to the electric motor, but even when the battery doesn’t have enough charge to power the car on its own, the rear motor can continue to provide four-wheel drive when needed.

​The combined power of both motors is 304bhp, making the P300e quickest Discovery Sport on offer, getting from 0-62mph in 6.2 seconds as it shuffles through its eight-speed automatic gearbox. Put your foot down and the transition from electric to hybrid power (where the petrol engine kicks in) is hardly noticeable, making it one of the smoothest plug-in hybrid setups we've tried in this regard. The three-cylinder petrol engine can be somewhat vocal, though no more than a diesel engine.