​The Land Rover Discovery Sport is reasonably efficient and cheap to run for a small SUV with serious off-road ability, but the two-wheel-drive model is more economical if you don’t mind staying on tarmac. From 2019, all but the entry-level diesel gained mild-hybrid technology to assist the combustion engine, saving fuel and emissions. However, even with the help of mild-hybrid technology, every petrol and diesel sits in the top BiK band for business buyers.

That's where the plug-in hybrid comes in, blending petrol and electric power to cut emissions to below 50g/km, making it a far more affordable prospect for company-car drivers. 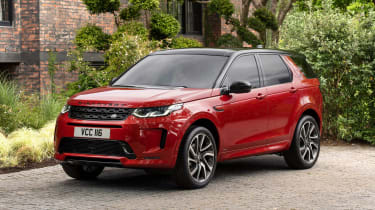 The less powerful 161bhp diesel model with five seats, four-wheel drive and an automatic gearbox can return up to 42.4mpg and emits from 180g/km of CO2, making it an expensive choice for company-car drivers.

The more powerful 201bhp version of the Sport posts virtually identical figures, also returning up to 42.4mpg. Road tax costs exactly the same £150 as the less powerful engine, as long as the Sport doesn’t cost more than £40,000 when new - the car will incur a £325 surcharge in the first five renewal years if it does.

Choose a petrol instead, and the 197bhp and 247bhp 2.0-litre engines can both return around 30mpg, while CO2 emissions from 213g/km place them in the most expensive company-car tax band. That's unless you go for the petrol-based plug-in hybrid P300e, with an electric range of up to 38 miles. This ability transforms its efficiency figures, rocketing its fuel consumption number to 135mpg, while simultaneously cutting its official CO2 emissions to 36g/km, which is low enough for London Congestion Charge zone exemption. More crucially, such a low CO2 figure pays dividends for its BiK rating, opening up the Discovery Sport to a new audience of company-car drivers. Charging the battery pack is pretty quick, taking less than 1.5 hours to get it from zero to 80% using a 7kW home wallbox.

The Discovery Sport’s insurance groupings range from 27 for the 2.0-litre diesel through to 42 for the plug-in hybrid in R-Dynamic HSE trim. That’s roughly on par with the BMW X3 and Lexus NX, but the Audi Q5 will cost more than its three rivals.

All Land Rover models are covered by an unlimited-mileage warranty that lasts for three years. A separate warranty covers the paintwork for three years against manufacturing defects. Extended warranties can be purchased at extra cost.