While there’s no escaping the size of the Land Rover Discovery, it’s an impressively relaxing and easy car to drive

The laws of physics dictate that big, tall cars like the Land Rover Discovery are less agile than smaller, lower cars, and that should inform your expectations – don’t expect it to corner like a hot hatchback, in other words.

That caveat aside, the Discovery is very enjoyable to drive. The diesel and petrol engine range are perfectly paired with the standard eight-speed automatic gearbox, while the air suspension irons out bumps with admirable efficiency. Press on through the corners and you’ll notice a bit of body lean, but the steering is well weighted and accurate, while the air suspension makes the Discovery a cosseting and relaxing car to drive.

The suspension does a good job of managing the weight of the Discovery, keeping it on an even keel without resorting to a hard ride. Indeed, the ride quality is very smooth and soothing. It’s quiet, too: Land Rover’s engineers say they’ve benchmarked the Discovery against the plusher, pricier and impressively hushed Range Rover; on the basis of our test drive, we believe them, as there’s very little noise from either engine.

Naturally, Land Rover has also remained true to the Discovery’s historic reputation for off-road prowess. The latest car takes full advantage of the brand’s Terrain Response system with low-speed off-road cruise control. Allied to sophisticated suspension and high ground clearance, it allows you to wade through up to 900mm of water, or tackle obstructions that would leave many SUV rivals high and dry.

Anybody worried that a 2.0-litre diesel engine will struggle to move a car as bulky as the Discovery can be reassured – the Sd4 manages 0-62mph in just 8.7 seconds. Admittedly, attaining this figure requires every one of the 237bhp, and sprints like this are a little noisy, but the Sd4 rarely feels underpowered. When not being pushed very hard it remains smooth, and its standard eight-speed automatic gearbox moves between gears almost imperceptibly for quiet, relaxing journeys.

The Sd4 is convincing enough to render a bigger engine unnecessary, but a 3.0-litre Sd6 diesel is still offered for those used to the near-silence of a six cylinder. It’s not massively more powerful than the Sd4 – only 65bhp separates the two and the 0-62mph sprint is only shortened by 0.8 seconds. It has more pulling power though, and you can feel the effect of this whenever you hit a steep upward gradient.

If you expect to tow, or frequently carry a full load of passengers and ballast, a Sd6 will be more relaxing to live with than a Sd4. It must be said, too, that the Sd6 sounds better, too, emitting a soft rumble in place of the slightly rattly sound of a four-cylinder diesel. 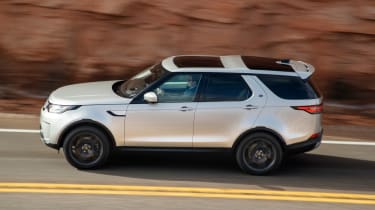 The Discovery is available with a 2.0-litre turbocharged petrol engine badged Si4, producing an impressive 296bhp and getting it from 0-62mph in 7.3 seconds.