A 2.0-litre engine makes the Land Rover Discovery reasonably efficient, but its CO2 emissions are a little high

When a car is first released, manufacturers tend to highlight any significant weight loss over the outgoing model, with a circa-100kg reduction usually being deemed noteworthy. That puts the latest Land Rover Discovery’s diet into context, as it’s 450kg lighter than the car it replaced. Economy is the net beneficiary here, as the less mass an engine has to shift, the less fuel it uses.

The previous Land Rover Discovery was built using a ‘ladder frame’ construction, so its bodywork was essentially bolted onto the car underneath. The latest Discovery, on the other hand, comprises a modern aluminium monocoque, meaning the bodywork is structural. You don’t need to know this as an owner, but it goes some way to explaining how the latest Discovery manages to be 15% more fuel-efficient than the last one – although it’s still not quite as frugal as the BMW X5, Audi Q7 or Volvo XC90. 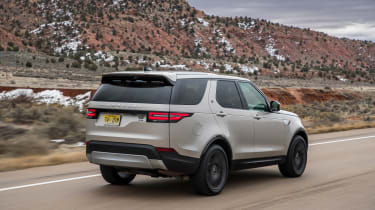 Under the more real-world WLTP ratings, the 2.0-litre Sd4 diesel’s fuel consumption is officially pegged at up to 32.4mpg, while the 3.0-litre Sd6 diesel returns up to 30.5mpg. Meanwhile, the 2.0-litre Si4 petrol engine is claimed to achieve up to 25mpg. These figures are quite impressive for a car of this size, but it's a shame that CO2 emissions starting at a high 229g/km mean every Discovery occupies the highest 37% Benefit-in-Kind (BiK) tax rating for business users.

Because the range starts at over £40,000, all Discoveries cost £475 a year to tax in years two to six. After that period is up (at which point the car could well be with its second owner) road tax drops to £150.

The Discovery is classified in insurance groups 33-44 out of 50, so premiums will be reasonably pricey – though in fairness, the least powerful BMW X5 and Audi Q7 attract higher rankings. If you’re really after a Discovery, you could use any savings you’ll net from insurance premiums to offset the company-car tax bills.

The three-year/unlimited-mileage warranty Land Rover provides with the Discovery is reasonable, if unexceptional.

It’s worth noting the Discovery’s diesel engines use a fluid called AdBlue to help keep emissions down. High-mileage users may find they need to top up with AdBlue between services; Land Rover will do this for around £30. A service plan may also be worth investigating, something which your dealer can arrange based on your circumstances.