The Range Rover Velar is luxurious, hi-tech and – we think – stunning inside. Although it’s split into three different sections, the central console is effectively one big glossy HD screen, giving you access to the majority of the Velar’s settings. 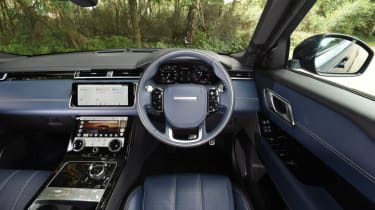 The top deck of the Velar’s dashboard hosts a 10-inch touchscreen, which is the ‘primary hub’ for the car’s infotainment settings. It has a motorised adjustable viewing angle and returns to horizontal when you switch the Velar off, resuming its previously held position when you power back on.

This top screen displays sat nav, music and phone information, as well as the status of the Velar’s numerous off-road systems. The Velar, just like the rest of Land Rover’s line-up, has finally been given Apple CarPlay and Android Auto via the Smartphone Pack. The screen below handles the climate control, heated seats and vehicle settings and can also take on responsibility for infotainment when the top screen is being used to display sat-nav directions.

Below this screen sit touch-sensitive buttons for the heated rear windscreen and a few other functions, while to prevent touchscreen overload setting in, there are three physical dials, too. One of these is for the stereo volume – and the stereo volume only – while the other two adjust climate settings for the driver and passenger.

That’s a lot to take in, but once you’re sat inside the Velar it all makes sense – from both a technological and an aesthetic point of view. It's perhaps not quite such good news after dark – there are an awful lot of illuminated controls and screens in your peripheral vision, and you'll want to keep a cloth handy to wipe the inevitable fingerprints away. 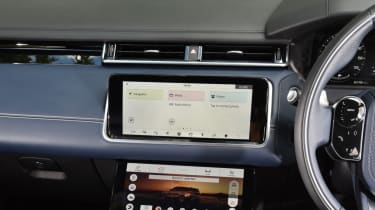 Upgrading to S trim costs around £5,000. For this you get 19-inch alloys, real leather seats, a power-operated boot, auto-dipping headlights, sat nav, an upgraded stereo and a reversing camera.

Next up is SE trim, which costs roughly £3,000 more than the S. This includes a 12.3-inch digital display instead of traditional dashboard dials, as well as a fatigue warning system, traffic-sign recognition, a 360-degree reversing camera and matrix LED headlights.

These last items comprise several individual LED beams, which can light up specific portions of the road ahead at night, allowing you to effectively drive on full-beam headlights without dazzling oncoming traffic.

For a further £5,500, HSE trim tops the range. This Velar has more leather trim inside, plus upgraded ‘Windsor’ leather seats and a Meridian stereo. You also get more chrome detailing, a power-adjustable steering column, adaptive cruise control and active, rather than passive, lane-keeping assistance, meaning the Velar will attempt to correct lane discipline errors in addition to warning you about them.

There’s also an R-Dynamic styling pack, which includes extra aluminium and gloss-black trim details, as well as satin alloy wheels for increased road presence. It’s available with all engines and all trim levels at a cost of just under £2,500. The pricey SVAutobiography takes things even further, with unique bumpers, body-coloured side skirts and quad exhaust pipes. Inside it has quilted leather seats, an upgraded steering wheel and a knurled finish for key switchgear. In this guise the Velar's interior is a real event, feeling more special than almost any other SUV. We'd avoid the optional 22-inch alloy wheels, though, because they not only make the ride less polished, but road noise increases too.

The On/Off Road Pack is worth having if you’re going to take the Velar off tarmac regularly, while the Drive Pack and Drive Assist Pack bring extra safety kit and the Climate Pack upgrades the air-conditioning. The Convenience Pack gets you an Activity Key, which lets you lock the main key inside the Velar and take with you a waterproof wristband with which you can lock and unlock the car – handy for surfers or boat owners.