The Range Rover Velar is comfortable and luxurious, but it can also be pretty involving to drive when you want it to be

The Range Rover Velar is at a great advantage here, because it shares its fundamental mechanical architecture with the Jaguar F-Pace – one of the best-handling SUVs money can buy. However, it doesn't take long to conclude that the Velar is designed with a greater focus on comfort than driving dynamics.

Conventional steel-spring suspension is standard on four-cylinder cars, and does a good job of absorbing bumps – you feel potholes less than you hear them – but doesn't lend the Velar a particularly agile feel. Where the F-Pace slices through corners, the Velar tends to wallow and doesn't inspire the confidence you feel in the Jag or its Porsche Macan rival. It doesn't lean heavily, though, and passengers don't get thrown around during spirited cornering.

If you push the Velar really hard in corners, you can feel the electronic safeguards holding the heavy SUV on an even keel – the stability control applies the brakes to any wheel where things seem to be getting too chaotic, while the engine-management system can cut the power, too. It's not a pleasant feeling and doesn't inspire you to make the most of the plentiful engine power. Although the 'sporty' R-Dynamic driving mode adds weight to the steering, it does little to make the Velar feel more nimble. 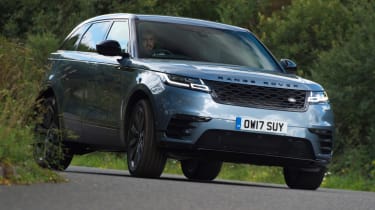 The picture is rather more encouraging if you relax at a high-speed cruise: noise from the engine barely penetrates the Velar’s interior and a pervading sense of smoothness sets the tone. There’s precious little wind noise, either, and while that means the Velar’s large alloy wheels seem to throw up more road noise than they actually do, it’s an impressively quiet cruiser. The 3.0-litre diesel models come with air-suspension as standard (and it can be added to the D240 and P300 models at a cost of £1,140), which makes things even smoother.

Also fitted with air-suspension, the SVAutobiography is sharper than the standard car without sacrificing comfort. It's less hardcore than the F-Pace SVR or Porsche Cayenne Turbo but feels reassuring in corners and has weighty steering. It can also go further than most of its rivals off-road, with an approach angle only slightly reduced by its more aggressive front bumper.

The Velar range starts with a 178bhp 2.0-litre diesel engine, which takes 8.9 seconds to go from 0-62mph. Upgrading to the 237bhp version of this engine shrinks that time to 7.4 seconds, which represents a level of performance more in keeping with a car of the Velar’s price.

The range-topping diesels, the 271bhp D275 and 296bhp D300, both feature a 3.0-litre six-cylinder engine and they’re quick as a result. Specifying your Velar with these engines will see it shoot from 0-62mph in just 7.0 or 6.7 seconds respectively, but that’s only half the story: these engines really get into their stride at higher speeds, meaning motorway overtakes can be achieved with minimum effort. 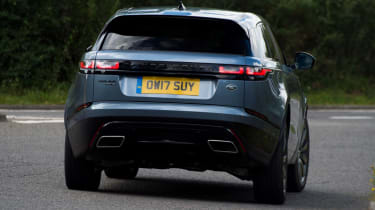 There are three petrol engines available with the Velar – two 2.0-litre units available in two different states of tune and a high-performance 5.0-litre supercharged V8 shared with the Jaguar F-Type sports car.

The smaller engines are badged P250 and P300 and produce 247 and 296bhp respectively. They manage the 0-62mph sprint in 7.1 and 6.2 seconds but neither matches the smoothness of their six-cylinder rivals. Both are responsive but given their thirst we’d recommend the higher powered 3.0-litre diesel units for the best blend of performance and economy.

With an even better soundtrack than Mercedes-AMG 4.0-litre V8, the SVAutobiography's V8 feels like it's been stolen from a racing car. The 5.0-litre engine's supercharger also means there's none of the turbo lag of some rivals - it yowls into life as soon as you prod the accelerator. Its 542bhp propels the four-wheel drive Velar from 0-62mph in 4.5 seconds and on to 170mph, using the same eight-speed automatic gearbox but with various modifications and chassis upgrades to handle the extra performance. It's a spectacular powertrain but it can expose the gearbox as a weak link; it sometimes feels slow to respond.