There are cheaper SUVs to run than the Range Rover Velar, but it’s competitively efficient nonetheless

The most efficient Range Rover Velar is the D180, officially up to 42mpg under new WLTP testing measures. That may be a cost you’re willing to bear, though, particularly if you prefer the styling of the Range Rover model, with its sleek design.

The Velar’s petrol engines are pretty thirsty. The 247bhp 2.0-litre P250 engine returns up to 30.8mpg and the 296bhp P300 version of the same engine claims up to 29.8mpg. The 5.0-litre SVAutobiography is on another level again, returning up to 23mpg. 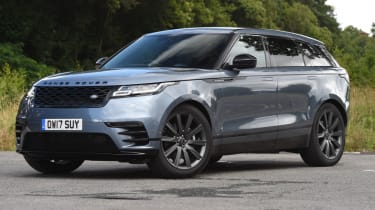 If you’re intending to run a Velar as a company car, every version in the range occupies the top BiK bracket, so it won't be cheap. This could change in future, however, if the Velar adopts the hybrid technology already used in the Range Rover and Range Rover Sport.

The standard Velar range sits in insurance groups 31-46 out of 50, so premiums will be pricey but in fairness, the BMW X3 ranges from group 28 to group 40 and the Audi Q5 starts in group 29. The mighty SVAutobiography sits in group 50, two higher than the Jaguar F-Pace SVR.

The three-year/60,000-mile warranty offered by Land Rover used to be average for the car industry, but with BMW, Mercedes, Renault, Toyota, Kia and a number of other manufacturers offering more generous guarantees, what’s seen as average has arguably moved on.

Land Rover’s fixed-price servicing plans make budgeting for maintenance easy. Prices for the Velar’s plans start at around £700 for four-cylinder diesel models and include scheduled maintenance (including AdBlue top-ups for diesel engines) for five years or 50,000 miles, while a 75,000-mile plan costs £800. Service plans for six-cylinder models cost a little more, and no 75,000-mile option is offered.