If you’re worried about fuel economy, chances are you’re probably not after a big luxury 4x4. The Range Rover is expensive to buy and run.

Despite Land Rover's best efforts to lighten the Range Rover, it's still an absolutely huge car and as a result, it's still heavy. Factor in the poor aerodynamics of its tall, boxy shape, and it's clear the Range Rover will struggle to deliver impressive economy and emissions.

While the latest Range Rover is the most fuel-efficient yet, we’re still talking about a car with a fair appetite for fuel. Even with a new design and mild-hybrid technology, the latest 3.0-litre D300 diesel claims an official fuel economy of 32.5mpg (WLTP) and CO2 emissions of 228g/km.

The more powerful D350 Range Rover, is even thirstier, managing 30.6mpg and 242g/km of CO2 - although this is an improvement on the SDV8 it replaces. If you want the ultimate in SUV performance, Land Rover says the 5.0-litre V8 petrol will do around 19mpg, but in everyday use, it's likely to be closer to 15mpg. However, you’re unlikely to find the economy much better in other high-performance SUVs like the Mercedes GLS 63 AMG, BMW X5 M or BMW X6 M.

The Range Rover P400e plug-in hybrid – which we've reviewed separately – combines a turbocharged 2.0-litre petrol engine and electric motor, providing an all-electric driving range of 25 miles on a full charge. Land Rover claims CO2 emissions of 77g/km and an average fuel consumption figure of up to 82.3mpg. The P400e brings significant Benefit-in-Kind (BiK) reductions for business users, being the only Range Rover not in the highest band. Unfortunately, though, its emissions mean it just misses the 75g/km cut-off for free travel into the London Congestion Charge zone.

A mild hybrid was introduced in 2019, the P400 MHEV is fitted with a turbocharged 3.0-litre straight-six petrol engine and a mild-hybrid system consisting of an electric supercharger and battery pack. It stores the energy normally lost under braking into the 48-volt battery. This power is used to improve the engine’s efficiency under load, assisting acceleration when starting off as well as improving the effectiveness of the stop start system. Land Rover claims this setup can achieve fuel economy of up to 26.4mpg and CO2 emissions of 243g/km - which isn't far off the efficiency of the D350 diesel engine.

With the exception of the plug-in hybrid version, every Range Rover is liable for £150 annual road tax from the second year. The P400e attracts a slightly reduced rate of £140. Again from the second year, all versions are liable for an additional surcharge of £325 for five years because they cost more than £40,000. 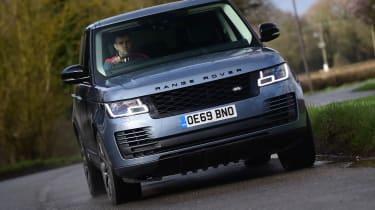 In terms of residual values, a rule of thumb is that the more expensive the model of Range Rover, the worse the depreciation will be.

Even Range Rovers fitted with sensible engines attract hefty insurance premiums. The cheapest model in the range – the SDV6 Vogue – is in insurance group 45 out of 50. As models get more expensive, they begin to move up the group rating system, with the V8 Autobiography and SVAutobiography models sitting in group 50, the most expensive insurance bracket. As ever, make sure to contact your insurer before making a buying decision.

Land Rover says you should have your Range Rover serviced every 15,000 miles. Big engines have lots of spark plugs and other things that will need to be replaced, so it'll be a lot pricier to service than your average family car.

There's a fairly generous three-year/unlimited-mileage warranty offered on the Range Rover. That’s pretty much average for this type of car, but the Toyota Land Cruiser comes out top here, with a five-year/100,000-mile warranty.