Lexus has unveiled its first-ever ground-up EV: the new Lexus RZ 450e. This new SUV will sit parallel to the full-size Lexus RX SUV in the brand’s range and will share many of its parts with the forthcoming Toyota bZ4X. 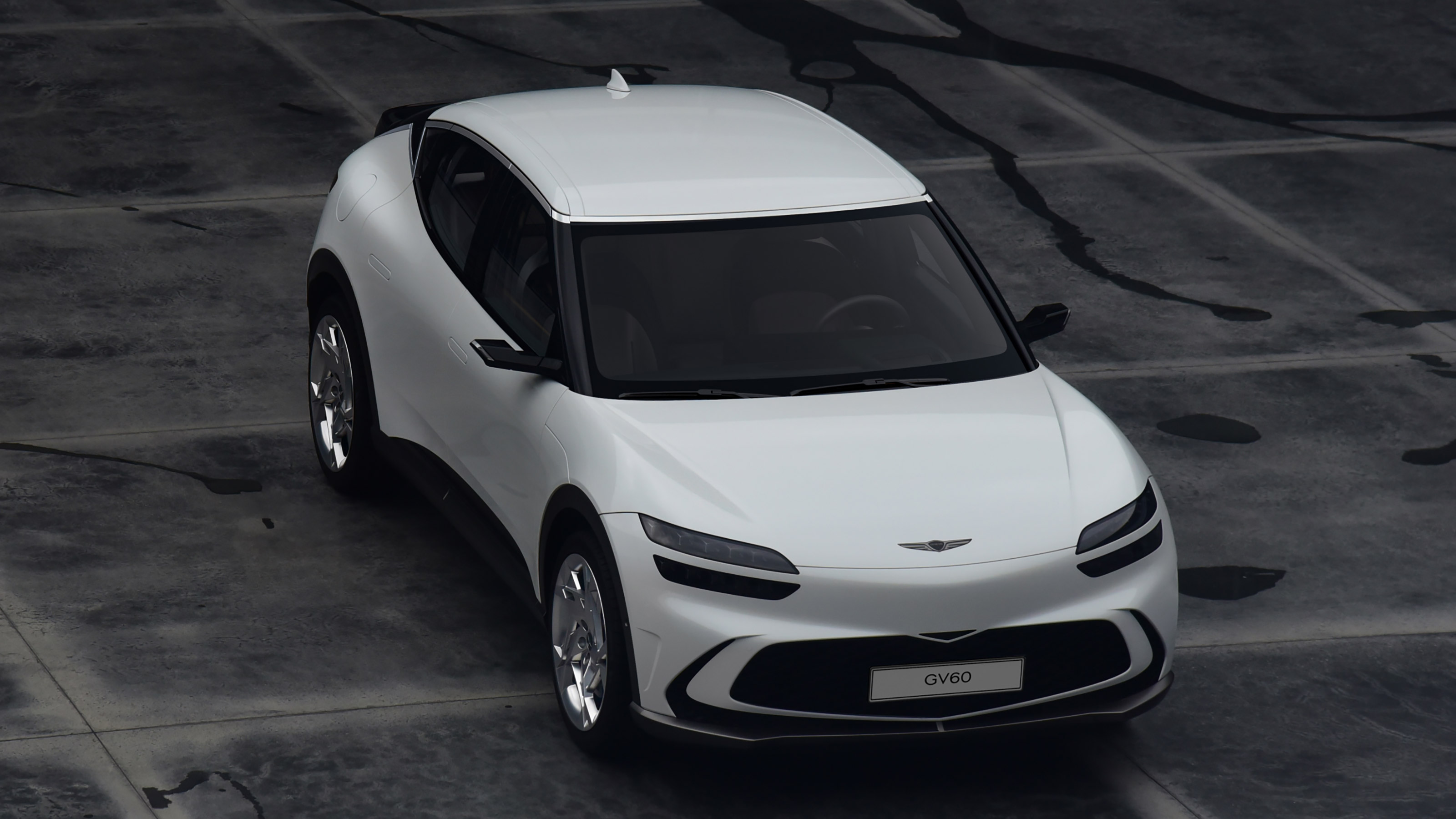 Pricing for the RZ 450e is yet to be revealed, but we expect it to start from over £50,000 when it goes on sale later this year. Electric SUVs are one of the most popular segments at the moment, with the RZ set to face strong pre-established rivals such as the Audi Q4 e-tron and Ford Mustang Mach-E.

In contrast with its rather convoluted name, the exterior of the new RZ 450e is much simpler than Lexus’ combustion-engined models. In place of the brand's trademark ‘spindle’ grille, the RZ instead gets a similarly shaped trim piece to aid aerodynamics. This is flanked by subtle vents which channel air through the wheel arches in order to further boost efficiency.

Speaking of the wheel arches, these are enhanced by plastic cladding in order to give off a more rugged appearance. At the rear, the RZ gets a sloping roofline and small ‘winglets’ in order to make the car as slippery through the air as possible. There is also a full width light bar, which is similar to the one used on the smaller Lexus NX crossover.

Elsewhere, the Lexus RZ 450e utilises a gloss black panel on the C-pillar to create the illusion that the roof is floating. Entry-level models will sit on a set of 18-inch alloy wheels, while higher-spec cars feature 20-inch alloys.

German rivals have historically had the edge over Lexus in terms of technology, but the new Lexus RZ 450e gets the brand’s latest infotainment system which ditches the old touchpad setup in favour of a slick 14-inch touchscreen. This boasts digitised, physical climate controls and is supplemented by a fully-digital instrument cluster for the driver.

Perhaps the most striking feature of the RZ’s interior is the optional ‘yoke’ steering wheel. Similar to that found in the latest-generation Tesla Model X, this butterfly-shaped wheel offers a more driver-focused experience and comes as part of the ONE MOTION GRIP system. This steer-by-wire setup allows for sharper turns at lower speeds with minimal steering input – only a 150-degree turn of the wheel is needed to go from straight to full lock – as well as offering more precise steering at high speeds. Of course, if you prefer a more traditional steering wheel, a circular one is available without the drive-by-wire technology.

Elsewhere in the cabin, the RZ 450e also gets extensive ambient lighting and a dimmable panoramic sunroof that can block infra-red radiation. A novel addition are the ‘radiant’ heaters mounted at knee-level in front of the driver and passenger, which work in tandem with the sunroof to use recycled warmth to heat the interior, boosting efficiency by reducing the need for the traditional, electrically-powered heater.

Overall, the Lexus’ interior design is very similar to its mainstream sibling, the Toyota bZ4X, as well as the mechanically-identical Subaru Solterra. Thankfully, a smattering of sumptuous leathers and other premium materials should help justify the RZ’s inevitable price premium over those two cars.

As mentioned, the Lexus RZ 450e shares its underpinnings with the Toyota bZ4X. Just like the Toyota, the Lexus is powered by a dual-electric motor setup mated to a 71kWh battery. However, for the RZ the power is raised from 215bhp to 308bhp, which in combination with the four-wheel drive traction allows the car to accelerate from 0-62mph in 5.6 seconds.

Official range and charging figures are yet to be released, but Lexus claims the RZ 450e will have a range that will “be able to cover more than 400 km (249 miles) in the combined WLTP cycle”. To achieve this, the RZ’s all-wheel-drive system can shut off the rear electric motor to save battery and a selectable ‘Range’ driving mode will take things a step further by limiting the car’s top speed and turning off the climate controls.

If relaxation is more of a concern than range, RZ drivers can make use of the extensive Lexus Safety System +. This includes adaptive cruise control, lane departure warning, automatic headlamp high beam and a pre-collision warning. The system is also bolstered by a driver fatigue sensor and an enhanced blind spot monitoring system, which can prevent passengers from opening the door into a passing cyclist or pedestrian.

Electrification may seem like a relatively new concept for most manufacturers, but it has been an integral part of Lexus’s brand for decades. The Japanese marque launched its first hybrid, the RX 400h, in the late ’90s – at the time it was nothing less than a technological marvel.

In more recent years, the firm has continued to perfect its ‘Hybrid Drive’ technology, with ‘hybrid’ and ‘Lexus’ becoming somewhat synonymous with each other. However, with the recent introduction of fully-electric BEVs, the brand has been surprisingly slow at adopting this new technology… until now. Enter, the Lexus RZ 450e: the brand’s first ground-up electric car.

Taking a look at the RZ for the first time, you may squint and begin feeling a sense of deja vu. Your eyes are not deceiving you; the Lexus RZ is actually heavily based on the new Toyota bZ4X and shares many of its parts as well as an equally confusing name.

Nevertheless, the Lexus, on paper, appears like your run-of-the-mill electric SUV: it has a 71.4kWh battery, mated to two electric motors which provide a combined 309bhp and four-wheel drive. Lexus claims a range of 249 miles and a 0-62mph time of around five and a half seconds. It's quick, but all-in-all, pretty standard for this class of car.

It appears, then, that Lexus may have lost its innovative streak and has just turned to building tarted-up Toyotas for those who fancy something different over the typical BMW or Mercedes. However, that predisposition quickly disappears as soon as you step into the driver’s seat because the RZ 450e could prove to be truly revolutionary behind the wheel – or should we say, yoke.

That’s right, the new Lexus RZ is giving buyers the option of paying extra to ditch the traditional steering wheel and opt for a butterfly-shaped ‘yoke’, like something straight out of Top Gun. This is all because of Lexus’s new ‘One Motion Grip’ technology which eschews a traditional set-up for one that only connects the steering wheel to the front wheels via electric wires.

Dubbed ‘steer-by-wire’, this system utilises a variety of sensors to detect steering inputs and relays them through to a motor inside the steering rack which subsequently turns the wheels. Therefore, there is no need for a traditional steering wheel. So, how is it in practice?

Our immediate impression was of the substantial feeling of the yoke; it takes more pressure to turn than you might expect. However we quickly got used to it after a few minutes.

The main advantage of this system is its ability to adapt the rate of steering depending on the situation. For example, at slower speeds it can reduce straight ahead to full lock to just a 150-degree turn, eliminating the need to cross your arms or take them off the yoke. This can be disconcerting at first, with the car changing direction much more quickly than you may expect. Nonetheless, we are sure that drivers spending more time in the car than we did will learn to adapt.

At higher speeds, the system does the opposite: each turn of the wheel feels more direct and precise. This, along with the RZ’s powerful electric powertrain, makes the two-tonne SUV feel much sportier than it has any right to be. Lexus tells us that this tech will end up finding its way into the brand’s sportier models, so a new version of the LC Coupe may be on the horizon.

We were only able to test the RZ on an enclosed track, but here we found the suspension to be as supple as any other Lexus model. The car does roll over road imperfections due to its hefty size, but overall the RZ is a comfortable car that should thrive on the bumpy roads of Britain.

For those who prefer a more traditional driving experience, Lexus will also offer the RZ with a standard steering set-up with a circular wheel. After driving around using the yoke, this almost felt archaic in comparison; it was certainly lighter, but having to turn the wheel at a greater angle just felt cumbersome. Lexus is yet to announce what the One Motion Grip system will cost, only stating that it will offer “value for money”, so we are unable to say at this stage whether it is truly worth the upgrade.

Elsewhere in the interior, Lexus has stepped up its game in terms of in-car technology because the RZ gets the same 14-inch infotainment touchscreen as the smaller NX. This is much more modern than the fiddly Lexus touchpad systems of old and comes packed with Apple CarPlay and Android Auto if you prefer to connect your phone. A “Hey, Lexus” voice command function also features, and thankfully, the climate controls remain as physical, yet digitised dials.

At face value, the Lexus RZ 450e seems like a relatively underwhelming attempt at an electric SUV from a manufacturer that is beginning to drop further and further behind German rivals. Thankfully, the RZ’s One Motion Grip system is just the kind of innovation this car and brand needs, and could well be the future for the way we drive. We just hope that the RZ’s claimed range of ‘over 249 miles’ really is a bare minimum estimate so that Lexus can provide real competition to the likes of Audi, Jaguar and even Tesla.

Need a cheap-to-run family car? Check out our list of the Top 10 best electric SUVs