Maserati would’ve benefitted from having a car like the Grecale on sale several years ago. It’s the Italian brand’s first attempt at a rival to the Porsche Macan, Jaguar F-Pace and BMW X3, so competes in a popular sector of the market. The Porsche Macan - incidentally just about to be replaced after eight years on sale - is its maker’s most lucrative model, and Maserati’s owners will be hoping for similar success here.

There’s a hint of the Ford Puma from some angles (not ideal considering the Grecale is likely to cost three times as much), while the rear is reminiscent of the bigger Maserati Levante. There are some typical Maserati flourishes, though, like the trio of air vents on each front wing and a wide chrome-laden grille, complete with the iconic trident logo. Even the entry-level GT model gets four large exhaust pipes, hinting at the performance within. 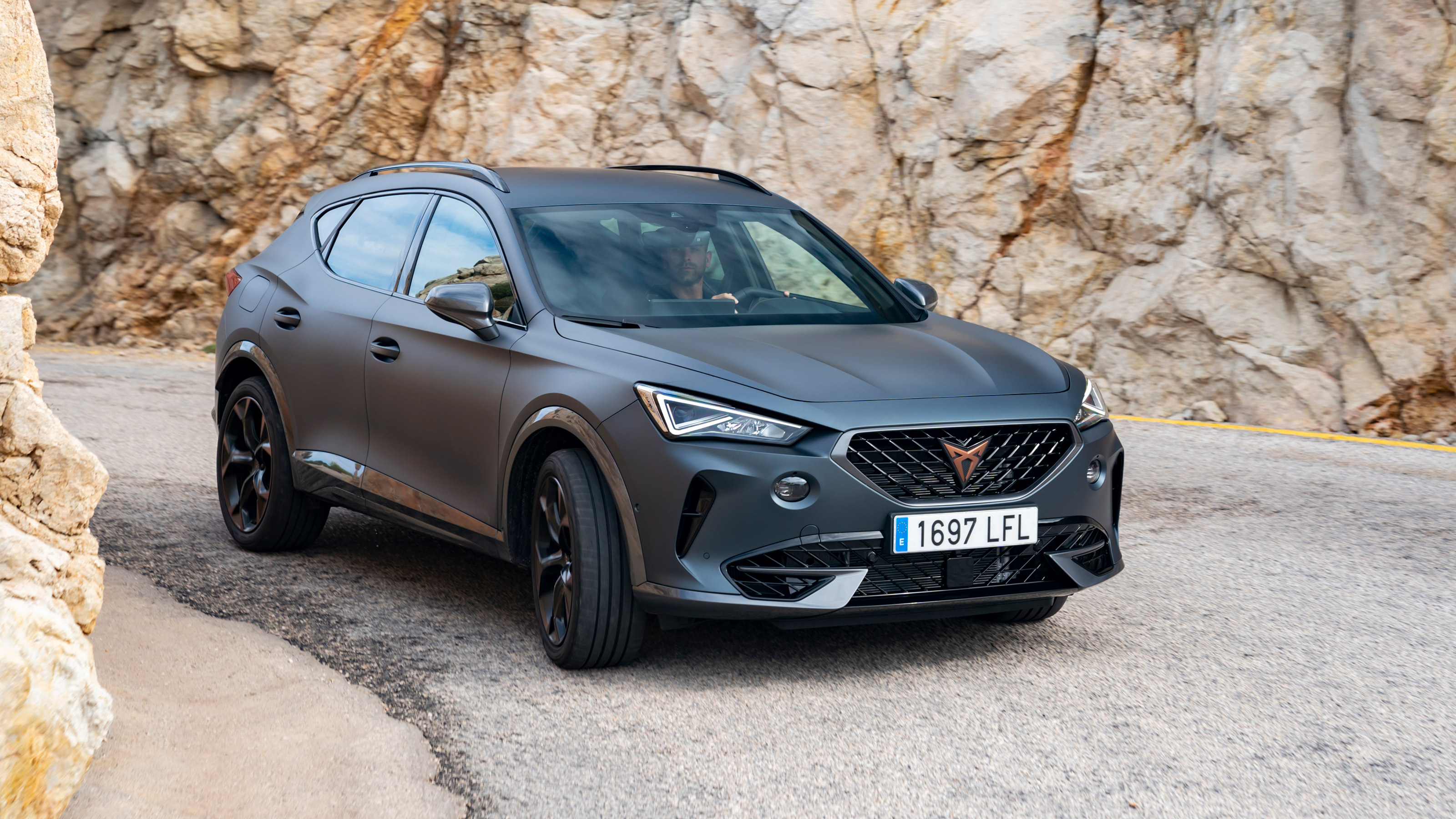 The GT gets a four-cylinder engine with 296bhp and a little dollop of mild-hybrid electrical assistance. Mid-range Modena specification offers slightly more power (324bhp), while the range-topping Trofeo model uses the same 3.0-litre six-cylinder engine as the Maserati MC20 supercar. It’s good for 523bhp and a 0-62mph time of just 3.8 seconds.

Also confirmed is an electric Grecale Folgore that’s slated to feature a 105kWh battery and 540bhp. You’ll have to wait for that version to come to market, though; it should arrive just in time to face up against the new electric Porsche Macan in 2023.

The Grecale sits on the same platform as the Alfa Romeo Stelvio, one of the best-driving SUVs in this class. And sure enough, it’s agile for a car this size, and there’s not too much body roll in corners. But that’s not matched by the ride quality, which isn’t good enough for a car like this. Sharp bumps result in crashes and thuds, even on models with air suspension.

It’s a shame, because the interior feels suitably premium. All the materials you come into contact with feel luxurious, and most of them are screwed together well, too. Further back, there’s a lot of space for rear-seat passengers and the 535-litre boot is certainly competitive with the class leaders.

Like most recent Maseratis, the Grecale isn’t quite good enough to beat its rivals in all areas, but it’s appealing and the badge alone will be sufficient to sway some buyers. It feels more exotic than a BMW X3 or Audi Q5, and should quickly become the Italian brand’s biggest seller.

The Grecale can be fairly economical given its prodigious power output

Performance will be of greater interest than efficiency for many Maserati Grecale buyers. But given Porsche no longer offers a diesel Macan, the benchmark is lower than it once was. Thanks to its mild-hybrid technology, the least powerful Grecale GT model manages up to 32.5mpg; no Macan officially manages more than 28mpg.

The much more powerful Grecale Trofeo returns up to 25.2mpg, until you explore the performance available.

CO2 emissions for the GT are a bit less than the equivalent Porsche, only just scraping under 200g/km - although that’s largely meaningless as company-car buyers will pay the top rate of Benefit-in-Kind tax for both cars. The upcoming electric Grecale Folgore will offer low tax costs and should boast the lowest running costs, although it may be more expensive to buy in the first place.

For now, Grecale buyers have the choice of three petrol engines - a different one for each trim level. GT and Modena use a 2.0-litre four-cylinder engine with a small amount of electrical assistance, with 296bhp and 324bhp respectively. Both have the same torque figure. Trofeo, meanwhile, gets the same twin-turbo 3.0-litre six-cylinder engine as the newly launched MC20 supercar, albeit with not quite as much power.

You still get 523bhp in the Grecale Trofeo, putting it squarely against the BMW X3 M Competition and Alfa Romeo Stelvio Quadrifoglio. Straight-line pace is certainly strong enough, with its four-wheel drive and slick automatic gearbox helping the Trofeo reach 0-62mph in 3.8 seconds. With technology derived from Formula 1, there’s almost no turbo lag and the Grecale Trofeo feels incredibly urgent. Its soundtrack is a little gruff but natural, unlike the synthesised noise you find in some rivals.

Selecting Corsa mode loosens off some of the stability control, making the Trofeo feel playful and dynamic. Our test drive was limited to roads on the outskirts of Milan city centre and on some city streets, so we’ll have to wait to get a full picture of its ability. The Trofeo is always firm, however, perhaps partly due to its 21-inch wheels. While based on the Stelvio Quadrifoglio, the range-topping Grecale feels like it’s been tuned with a slightly greater focus on luxury.

We’re sure many buyers will be happy with the less expensive GT model, though, with its 5.6-second acceleration sprint. Maserati’s claim that the mild-hybrid tech makes the engine feel like a six-cylinder one doesn’t quite ring true; you can feel a little extra oomph from the electrical system when you accelerate, but the droning engine noise reminds you that this is a relatively humdrum 2.0-litre four-cylinder engine rather than a smoother six-cylinder unit.

The GT weighs nearly 1.9 tonnes, and its sense of speed isn’t so strong at higher revs. It’s agile and has fast steering when driving a bit slower, but is happier to cruise at higher speeds. Just watch out for its ride quality; even on air suspension the Grecale falls ungracefully into potholes, although it seems relatively controlled on smoother roads. Those are rare in the UK, though.

Inside the Grecale, the big news is that it doesn’t use a rebranded version of a Fiat or Jeep infotainment system; the new 12.3-inch touchscreen has a layout that is easy to live with, with crisp graphics and quick responses. Connectivity is as good as the class leaders, with Android Auto, wireless Apple CarPlay, Amazon Alexa compatibility and online features like fuel price data and over-the-air (OTA) software updates. Below the main screen is an 8.8-inch panel that takes care of climate functions.

There’s also a digital dashboard and a digital clock, which is a Maserati first. As well as displaying the time, it can also be configured to show a compass or a G-meter reading.

The Grecale uses a very impressive selection of materials, with wooden trim, cool metal and soft leather. Build quality and the finish of the interior is generally good, although our early production model suffered from a few creaks. Hopefully that isn’t the case with customer cars, although the car’s firm ride could bring out squeaks and rattles later down the line.

Practicality is strong in the Grecale, with decent interior space and a big boot

Sitting on a platform with a long wheelbase, the Grecale is a practical car. Maserati claims class-leading rear-seat space, and sure enough there is more than enough legroom, as well as a good amount of headroom and shoulder room. Adults should be more than happy to jump in the back, even on longer journeys.

That doesn’t come at the expense of boot space, either. Mild-hybrid GT and Modena cars offer 535 litres of luggage capacity, while Trofeo models don’t have the small extra battery so boast 570 litres. The Porsche Macan offers 458 litres.

Reliability and safety are both unknown for now

It’s too early to say how reliable or safe the Grecale will be, but you can specify a range of driver assistance systems that add up to Level 2 semi-autonomous driving capabilities. That should mean the Grecale, if equipped with these systems, will be able to adapt the speed of vehicles in front, stay within a lane and come to a stop automatically if required.

Maserati isn’t known for unblemished reliability, and there’s some new technology on board, but the familiar platform and Stellantis ownership should work in the Grecale’s favour.

The Maserati Grecale is the Italian car maker’s first small SUV, but how does it compare with established rivals? We compare it against the Porsche Ma…