"The Mazda3 Fastback offers more space than the hatchback, but the same equipment and stylish looks" 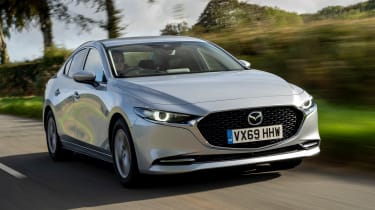 The Mazda3 Fastback is essentially a longer version of the Mazda3 hatchback. It’s a rival to cars including the Toyota Corolla saloon, the Honda Civic saloon and the Hyundai i30 Fastback, but by virtue of being slightly more upmarket it may also catch the eye of buyers looking at the Mercedes CLA and Audi A3 saloon. Most manufacturers are moving away to concentrate on hatchbacks and SUVs, so the Mazda3 Fastback is a good option if you want something a little different to cars like the Ford Focus and Vauxhall Astra.

A streamlined rear end makes the Mazda3 Fastback a particularly good-looking car and one that clearly follows the example set by its bigger sibling, the Mazda6. Following the company’s ‘KODO’ design language, the Mazda3 has a cohesive, muscular design that makes it look more expensive than it actually is.

Best saloon cars you can buy in the UK today

There's only one engine, a 2.0-litre petrol that’s the gem of the Mazda range. Called Skyactiv-X, it uses clever technology to give the power delivery of a petrol engine with the economy of a diesel. At a claimed 52.3mpg for the manual version, it’s more economical than you might expect, despite taking the car from 0-62mph in just 8.2 seconds. It's an enjoyable engine to use, too, revving freely and delivering its 178bhp with enthusiasm, while the way the car drives is second only to the BMW 1 Series in this price bracket.

The fit and finish of the Mazda3 really is excellent and much better than you might expect considering Mazda isn’t traditionally considered a ‘premium’ marque. Mazda as a brand finished very strongly, coming fourth out of the 30 manufacturers ranked in our 2019 Driver Power owner satisfaction survey of cars currently on sale in the UK. 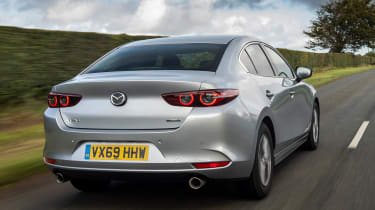 Safety is impressive, with the Mazda3 earning the maximum five-star rating in independent crash-tests performed by Euro NCAP. The car will also brake automatically if it senses an obstruction in the road and you don't take action.

With stylish looks, good value, engaging handling and an excellent reputation for reliability, the Mazda3 deserves to be on your shortlist if you’re looking for a family car.

How to choose the perfect family car (sponsored) 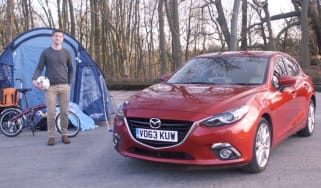 How to choose the perfect family car (sponsored)

Families rarely travel light and the practical design of the Mazda3 means yours won’t have to. Watch our video and see.
Skip to ContentSkip to Footer