The risk with a family car with sport styling like the Mazda6 Tourer is that it won’t feel as good to drive as it looks, but that’s not true of the impressive Mazda. Positive steering gives you the confidence to take corners at speed and the firm suspension resists body lean well. But it’s not quite as good at dealing with potholes – hitting one at speed will send a shudder through the interior.

With a view to increasing passenger comfort, the latest raft of improvements to hit the Mazda6 included the introduction of G-Vectoring Control (GVC), which works by gently adjusting power depending on your steering inputs, allowing the weight of the car to shift more fluidly when it takes corners. This is supposed to increase stability during normal motoring and isn’t intended as a performance driving aid.

As impressive as this sounds, we can’t claim to have felt much of a difference when we put this technology to the test, but it certainly doesn’t seem to have done any harm. The Mazda6 Tourer remains a very relaxing and soothing car to travel in, with a smooth ride, especially in the SE-L Nav+ and SE-L Lux Nav+ models with their smaller alloy wheels. 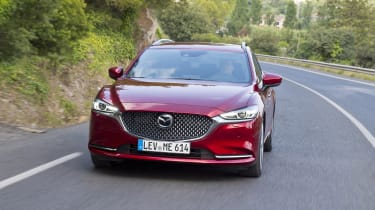 Go for a drive and you’ll soon understand why the top-of-the-range 181bhp diesel model is our pick of the range. It packs quite a punch (going from 0-62mph in 8.6 seconds) which means overtaking can be completed quickly and safely, while the tight and precise manual gearbox encourages you to make full use of the engine’s power. A top speed of 140mph means the engine is barely stressed at 70mph. A BMW 3 Series Touring 320d is faster and a little more economical, but it’s almost £7,000 more expensive (even in the cheapest SE trim).

The 148bhp model takes just over 10 seconds to complete the 0-62mph dash, but it shares the more powerful diesel’s impressive mid-range shove, while its 130mph top speed also makes for quiet cruising at the UK legal limit. Recent improvements have also noticeably reduced harshness and vibration thanks to a clever counterweight system inside the engine. An automatic gearbox is optional on both these engines, but it increases the 0-62mph times by about half a second. 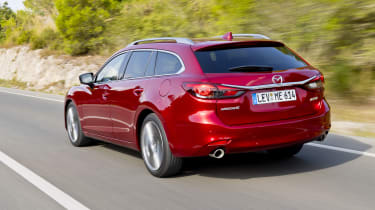 Few buyers are likely to choose the petrol versions of the Mazda6, which is a shame because they’re good engines in their own right. Mazda offers the same 2.0-litre petrol engine with either 143bhp or 163bhp – enough to get the car from 0-62mph in 10 or 9.4 seconds respectively. In the real world, the less powerful engine can feel sluggish at times and both models are noisier at a cruise than the diesel alternatives.

You can also choose a 2.5-litre petrol engine on the range-topping model. It’s a bigger size than its rivals offer, and 191bhp means it can get from 0-62mph in 8.1 seconds. We don’t think it feels quite as punchy as the most powerful diesel, though, and that engine comes with Mazda’s crisp manual gearbox whereas the most potent petrol engine is auto-only.