Mercedes has a long track record in building vans, but an even longer history in building upmarket cars. Those worlds collide here, meaning the Mercedes V-Class feels rather special inside – whether that’s for the driver or the rear seat passengers.

Visibility for the driver is also very good, thanks to a seat that’s mounted high and large door mirrors, making the large V-Class easier to drive in city streets and car parks.

The Mercedes V-Class has the same sort of dashboard you’ll find in other Mercedes cars. That means it is elegantly styled, and features switches and dials that look and feel like they’re built to last. The facelift introduced the turbine-style air vents of other Mercedes' too, but the V-Class occasionally betrays its van roots with the odd rattle from the interior trim. 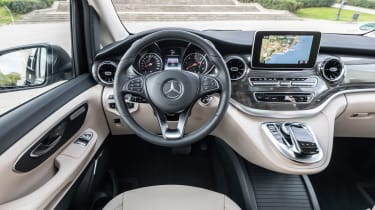 The car’s instruments are easy to read, as is the colour trip computer screen that sits between the speedo and rev counter, however analogue dials and a table-style infotainment screen aren't as contemporary as the twin-screen setup found in fresher models like the Mercedes A-Class. There are buttons on the steering wheel that operate phone and audio functions, along with heater controls and more audio buttons on the dashboard. These are clearly labelled and the buttons are large enough to press without too much fiddling.

Most of the car’s other functions, such as sat-nav, are operated through a rotary dial and touchpad. It’s similar in concept to the BMW iDrive and Audi MMI controllers, but it’s not as intuitive to use because there are too many menus, which require too many button presses.

Trim levels for the facelifted V-Class include Sport and AMG Line, while the Exclusive is an extremely luxurious model with six-seats, which costs around £30,000 more than all the others. Every V-Class is well equipped, with kit including leather seats, electric sliding doors on both sides, automatically dipping LED headlights, parking aids and a rear-view camera. 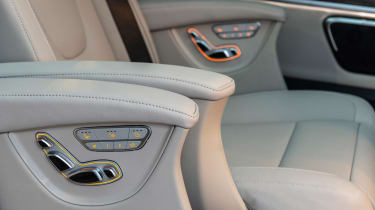 The V-Class looks slightly different depending on which trim you choose, with a diamond grille with chrome pins fitted to the AMG Line version, as well as a slightly sportier interior. Meanwhile, the Exclusive has separate 'Luxury' rear seats, similar to those found in the Mercedes S-Class, that recline and have massaging functions to help ease the miles.

The V-Class is already extremely well specified for both driver and passengers to travel in comfort and luxury, which means that the options list is rather short for a Mercedes model. However, the V-Class can still be specified with extras, such as a ‘Comand Online system’ for satellite navigation, 360-degree camera, towing pack, memory seat package and a premium Burmester surround sound system. Parktronic, part of the parking package that helps assist with steering and maneuvering when parallel parking, is optional on all trim levels except for range topping Exclusive trim.