The Mercedes V-Class shows its van roots, but it's fairly comfortable and the engines feel powerful

It’s hard to compare the Mercedes V-Class to rivals such as the Ford Galaxy or Citroen Grand C4 SpaceTourer because while they’re almost as big, they’re also designed to be MPVs from the outset.

The V-Class is based on the Mercedes Vito van, and as such brings compromises, although not as many as you might think. On the move, the V-Class's rear suspension has a tendency to crash over bumps in the road, but with some passengers in the back seats, it smoothes out the worst road surface imperfections well and we found the long-wheelbase version most comfortable of all.

The Mercedes’ steering system is very light and much slower to react than models like the Ford S-Max – another hangover from the V-Class’s humble roots. The standard-fit Agility Select system, which can adjust the car’s suspension and steering to offer a more relaxed, more sporting or more efficient drive. 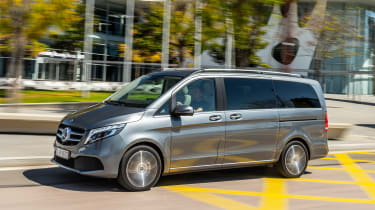 However, few will buy a V-Class as a toy – this is a model that’s more likely to be seen outside posh hotels, golf clubs and airports than the school gates, so to criticise it for not being fun is rather unfair. For what the V-Class has been designed for, it is very good.

If you want the Marco Polo camper van, the implicit extra weight of the conversion means it’s a little slower, softer and less responsive than the standard V-Class, but it’s easy to drive and quiet once you’re cruising.

The facelifted Mercedes V-Class has two engine options. They’re both 2.0-litre diesels, with a range-topping V 300 d making an impressive 236bhp and a detuned version of the same engine fitted in the V 220 d. It's far smoother engine than the older 2.1-litre diesel and the V 300 d feels extremely quick for an MPV that started life as a van. 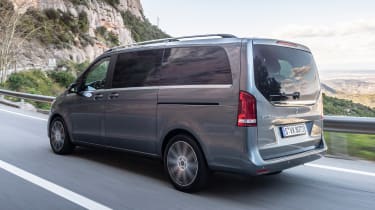 While drivers are unlikely to test its 0-62mph time of 7.8 seconds very often, its mid-range punch does come in useful, especially when the V-Class is fully loaded with passengers and luggage. Its new nine-speed automatic gearbox also impressed, proving itself less hesitant when pulling away from junctions and roundabouts than the DSG automatic fitted in the Volkswagen Caravelle.

The V 220 d will likely be powerful enough for many, though, especially if most journeys are to be undertaken around town, with less high-speed driving.