The Mercedes V-Class is as vast inside as you’d expect, even with all six to eight seats in place

Now we get to the nub of the review. How much practicality does the Mercedes V-Class actually offer? Well, if you need more space than this, then you don’t need a people carrier; you need a minibus.

But for all that space, the V-Class is still pretty easy to live with. Those sliding doors might be heavy, but they open and shut electrically, as does the big bootlid. And while the V-Class is huge – the Extra Long version is more than 5.3m in length, and even the standard car is longer than a Ford Mondeo – the rear view camera and self-parking system make things very straightforward indeed.

If you think you’ll still struggle, then choose the £350 optional 360-degree camera option, which will make short work of parallel parking.

The V-Class might be big, but with those big sliding doors and front doors that open wide, climbing in isn’t a problem, even if it is a bit of a step up into the car. Once in, it’s easy to climb into the rear because all of the seats slide back and forth individually on rails. 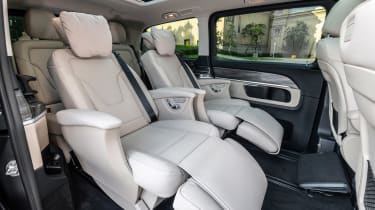 Once installed in the seats – even those in the third row – there’s plenty of space, and because the seats all slide, legroom can be increased further if needed. All of the seats are very comfortable and supportive, and with fairly narrow thin backs, none of the seats eat into passenger space behind.

Elsewhere, the glovebox is a decent size, and there are cupholders and a large cubby between the front seats, although because it’s mounted low, it’s quite a reach down.

Rear passengers are variously served with 12-volt sockets and cupholders, and in seven-seat Extra Long versions, there’s a pop-up table too.

Unlike most MPVs, like the Ford Galaxy, you don’t have to trade passenger space for luggage room.

By comparison, the Galaxy can only muster 300 litres will all seven seats in place, and even as a five seater, it can ‘only’ manage 1,301 litres. 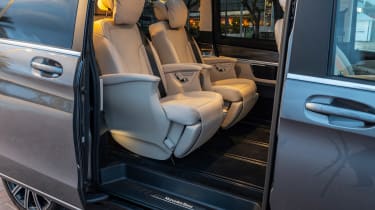 The boot is wide and very tall, and there’s no lip to lift luggage over. The boot floor is low too. But although the bootlid is huge – and too big to open if you’ve reversed into a parking space – it is at least powered, so will open and close at the touch of a button.

There’s also space under the seats to store smaller bags. That means that V-Class will be capable of taking a full load of passengers, and their luggage, without breaking sweat.

With the optional removable towbar fitted, which also features a 12-volt socket, the V-Class can tow a braked trailer of up to 2,500kg.